“I’m telling you, it feels so good to drive this car,” was the first thing Tony Kanaan had to say about sampling the new 2018 universal bodywork at Sebring with his new team, A.J. Foyt Racing. With the significant drop in downforce for road and street courses, Kanaan is fond of what he found from inside his No. 14 Chevy-powered Dallara DW12.

“I like this car 100 percent better; I think the thing I struggled with in the past was the [DW12] with all the downforce, and it never really fit me the way I like,” the Brazilian told RACER.

More than 20 years into his career as an IndyCar driver, Kanaan has completed countless tests with the best cars and engines CART, the Indy Racing League and the Verizon IndyCar Series has produced. It made the one-day outing in Florida, as part of Chevy’s final Manufacturers’ test of the season, a welcome trip back in time to a place where he felt at one with an open-wheel car.

“I like the 1000hp cars I’ve driven in the past; they move around a lot on you, you had to hustle them, and when I pulled out this morning for the first time, it was like, ‘holy s**t this is fast’ at the end of the straight,” he said. 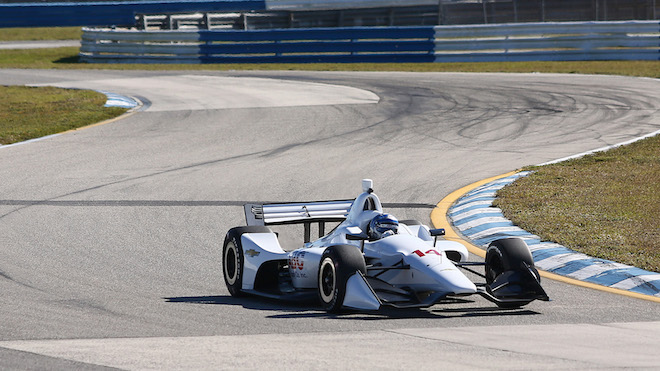 “And then you get to the brake zone, you have to go 200 feet earlier because the speed is higher, and it was like, ‘Holy s*** it won’t stop…’ I was like, ‘I remember this feeling…this is what I’ve been missing.'”

Kanaan’s happiest days in IndyCar came when making speed, and managing it at the edge of adhesion, was mostly in the driver’s hands. With the excessive downforce produced during IndyCar’s aero kit era now a thing of the past, Kanaan sees a brighter future ahead – at least with his Foyt entry.

“I strongly think it’s a lot different, and to me, I’m not saying I’ll be better or worse, but I’m more used to this than the other style which was a lot of downforce, not a lot of effort, carry a lot of speed into the corner, keep the minimum speed high, minimal throttle lifting,” he said.

“Now, you can’t do any of that. The car does less of the work for you, and I believe this is going to be better for me, because it’s what I did for so many years of my life.”

A late allowance by Chevy to use Kanaan and the 2018-spec No. 14 chassis as part of its last test day was a worthy exercise.

“It was a positive day for us because we got this test last-minute and Chevy, and it was really nice of them to squeeze us in,” Kanaan added. “Us getting this car together so quickly to make the test was a hassle, but big props to the team because it ran all day with no problems. We didn’t have any expectations, so it ended up awesome.”

TK also enjoyed getting to know his new team in a track environment, although with his considerable experience, few introductions were required. 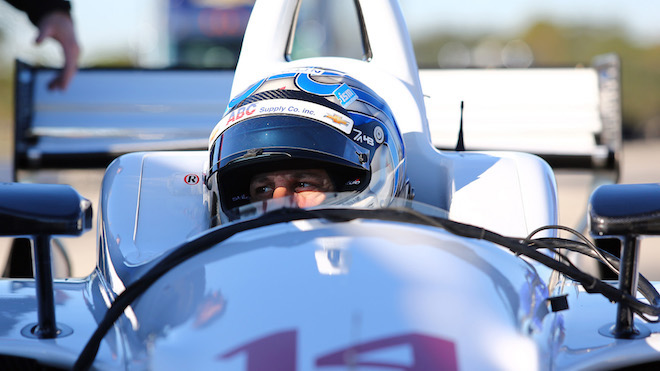 “If you’ve been around as long as I have, you end up working with just about everybody, and I think I already knew 80 percent of the team,” he said with a laugh.

“There’s a lot of people I’ve worked with in the past, and it was just awesome to spend time with them and with the car because it looks so good. It looks like a real racecar. Finally.”

Getting an advance look at how the Foyt team operates as a unit with new technical director (and race engineer) Eric Cowdin in place, and the to-do list involved with turning the No. 14 into a winner was worth the trip to Sebring alongside Team Penske and Ed Carpenter Racing.

“It’s a merging of mentalities and work ethics,” Kanaan said of what he and Cowdin bring from their time together at Chip Ganassi Racing. “Me and Eric have worked a lot together, and we didn’t come in and say, ‘this is what we did before so that’s what you need to do.’ There’s a mix of people that worked with me at Tasman, at Andretti, and we’ve all been around. We all know what to do and how to do it right.

“One thing that I had to reset, which I prepared for before I signed, is we have a lot of work to do. It’s not a plug-and-play situation. But I’ve been in this situation before, like at KV. It isn’t like it was at Ganassi where everything is there, it’s all done, just drive the car. Here, what we’re trying to do, it’s big, and it’s going to take a lot of work. And we don’t mind that at all. We’re just getting started.”