Official lap times were not provided during IMSA’s two-day Balance of Performance test at Daytona, but most who were in attendance have said CORE autosport and its new ORECA 07 LMP2 Prototype were fastest overall.

And most who were there have also been vocal in their beliefs that sandbagging was rampant among the Daytona Prototype international manufacturers, which would make gauging true speed an interpretive assignment. Whether CORE was up front due to its innate abilities, or because DPi teams were doing their best to stay off IMSA’s radar, the outcome was impressive nonetheless.

Having won all there was to win in IMSA’s PC class before they moved to GT Daytona with a Porsche 911 GT3 R last season, CORE veteran Colin Braun says the team’s speedy debut in Prototype was a welcome sign of what they hope will become the norm in 2018.

“It went really well and we had a great test,” he told RACER. “When you buy an ORECA LMP2 car, it’s certainly not the first one built…they’re so refined, which makes our jobs easier. We didn’t have to reinvent the wheel, just drove it, got used to our own comfort with seats, did shock sweeps and bar changes, and it went super smooth.”

The pro-grade talent within the No. 54 CORE program on its own would give some DPi efforts a reason to be jealous. Provided IMSA’s BoP tables offer a level playing field, Braun, team owner/driver Jon Bennett, and the French pairing of Romain Dumas and Loic Duval can be counted on to give the DPi field plenty of headaches once the Rolex 24 At Daytona gets under way.

“I think the fact that we’re in a WEC P2 car is going to be a great thing for Daytona because the race rewards reliability, and obviously, we have really solid co-drivers,” Braun added. “At the last test we did at Daytona, Jon did an amazing job, and the five years we did in PC together saw him adapt very quickly to it. We’ll do our normal thing of keeping our heads down and work hard. There’s a lot of tough teams there, but we’re ready for the battle.” 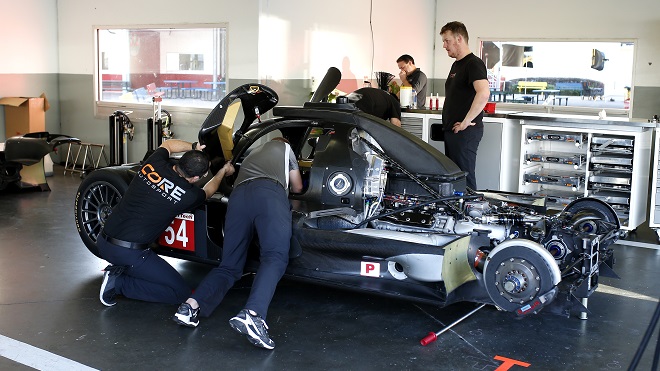