Sato proud to show off Borg-Warner Trophy at Motegi

Sato proud to show off Borg-Warner Trophy at Motegi

More than 20,000 Japanese fans, along with luminaries from across Honda’s motorsport platforms including Jenson Button, Marc Marquez and Dani Pedrosa, were on hand to celebrate Takuma Sato’s Indy 500 victory in May and the Borg-Warner Trophy’s first overseas visit at the Honda Racing THANKS DAY event at Motegi on Sunday.

The trophy was joined by Sato’s Indy-winning car on display in a garage, with Sato also putting the car through its paces with some demonstration laps.

“Honda Racing THANKS DAY is about the fans and all their passion and loyalty,” Sato said. 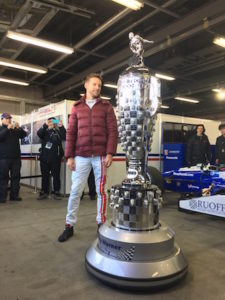 “It was historic for the Borg-Warner Trophy to leave the United States for the very first time ever, and come to Japan, it makes us all proud. I have been very fortunate to spend so many years with Honda, and to win the Indianapolis 500 with them has been a dream. I love the Indianapolis 500 and the Borg-Warner Trophy and to share my win and the trophy here in Japan has been something I will never forget.”

While the storied trophy remained a constant magnet for selfie sticks throughout the day, it attracted just as much interest from some of Sato’s Honda stablemates.

“”That is one amazing trophy,” said Button. “There are so many of my friend’s faces on it and so many Formula 1 drivers who won at Indy, too. Neat to see Dario and his three silver faces – and look at Takuma, what a proud smile!”

Also present was former HPD executive vice-president Michihiro Asaka, who was instrumental in bringing Honda into IndyCar in the early 1990s.

“We were so happy getting the first Honda driver’s face on the Borg-Warner Trophy, [and] there are now so many great Honda drivers represented over the years,” he said.

“I am very proud of our success in racing and at Indianapolis. It was not always easy, but we worked very hard to reach our goals. We are very honored the trophy came to Japan. It is historic and all the fans and media can’t believe they get to see it with their own eyes today. I have seen it many times at Indianapolis Motor Speedway, but I never, never thought I’d see it in Japan and at Twin Ring Motegi. This is a special, special day for all of us to share and remember.”

The Borg-Warner Trophy is scheduled to return from its tour of Japan next week, however for Sato’s Indy-winning car, the journey is over: it will now go into Honda’s Collection Hall at Motegi, where it will be placed on display alongside other historic Honda-powered machinery including Buddy Rice’s 2004 Indy winner, and ex-Ayrton Senna F1 cars. 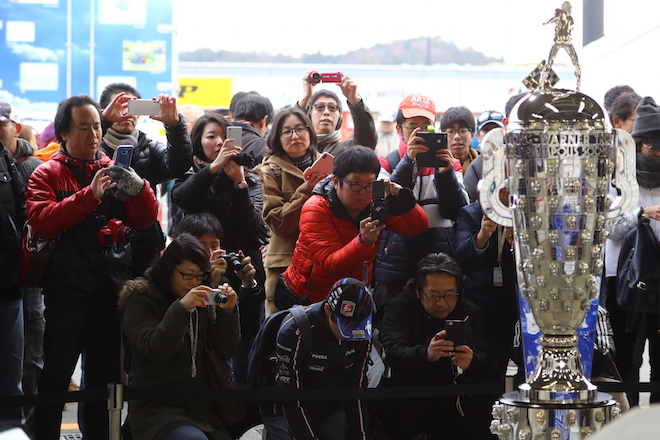