Daniel Abt was given the gift of 25 points on his 25th birthday in the second half of the FIA Formula E Hong Kong ePrix, via his first series win…only for the Audi Sport Abt Schaeffler driver to have the victory snatched away after the race for a technical violation.

Although the decision is under appeal, for now it has handed the win to Mahindra driver Felix Rosenqvist, who started on the pole but had to charge back through the field after an opening-lap spin.

The misery for Abt was shared by rookie Edoardo Mortara. Driving for Venturi – one of the founding teams of the series that has yet to score a win – the Swiss driver led every lap from the beginning of the race, and had the win in hand with a three-second advantage. But, with three laps remaining, he spun just as he turned into the right-hand hairpin, allowing Abt and Rosenqvist to sail past for the win.

Mortara recovered to finish third on the road before Abt’s DQ. Mitch Evans brought his Panasonic Jaguar home in fourth, with Race 1 runner-up Jean Eric Vergne in fifth place in his Techeetah entry.

“I thought I would be in a position to attack Edoardo early on, but he was damn quick, and so I began to judge my pace to stay close and in contention,” said Abt prior to learning of his disqualification, which came after FIA officials determined that identification numbers on some of the car’s components didn’t match up. “When you’re last name is the same as the team owner, you get a lot of people thinking you don’t deserve to be here. But today, I hope I proved that I do. I also have to say hats off to Edoardo. He drove a heck of a race no matter what happened at the end.” 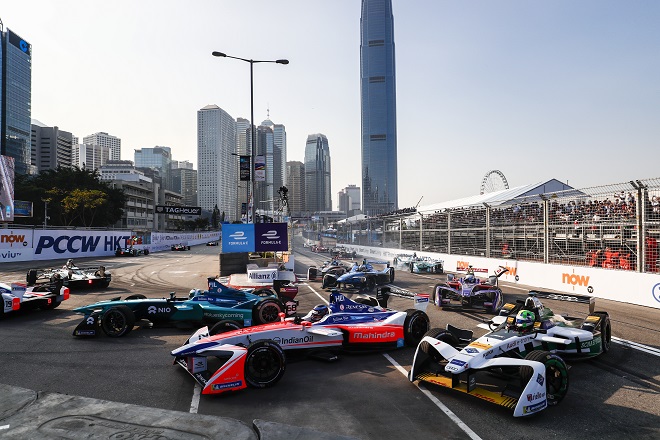 Like the first race on Saturday, Race 2 got off to a troubled start. This time, the culprit was a faulty start light that delayed the beginning of the race by some seven minutes. Instead of the usual standing start, the race began behind the pace car. When the field arrived at Turn 1 for the first time in earnest, polesitter Rosenqvist spun on the brakes in his Mahindra entry. Mortara took over the lead while Rosenqvist slipped to 11th place.

“It was just a mistake on my end,” admitted Rosenqvist (at left, below, during the pre-DQ announcement podium celebration) of his spin. “It’s a shame to lose the win this way, but I had a great recovery with fantastic pace. So, I have to be happy in the end with how it turned out, even if we had a car to win.” And as he subsequently found out, he did win, at least for now. Even so, he admitted it was less than completely satisfactory:

“I’m happy with taking away 29 points – for pole, winning the race and fastest lap – it’s a lot of points! But I feel sorry for Daniel as well – he won the race on track. It’s not the way you want to win and I don’t feel like I’ve won the race. But I’m happy with the points.” 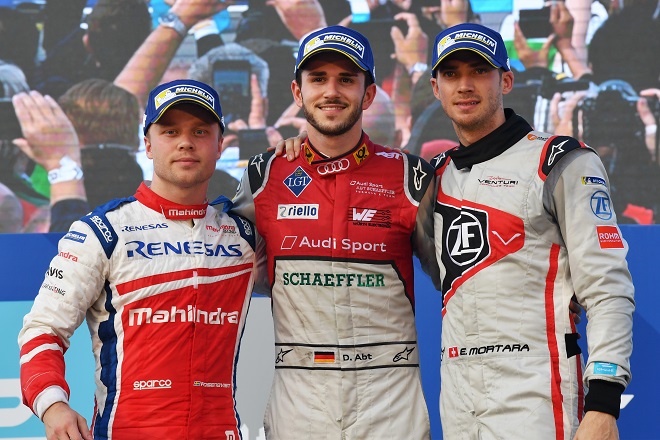 Most of the leaders pitted for the car swap with 23 laps to go. Mortara kept his advantage of 2.5 seconds over Abt and Evans as they all rejoined the race.

Abt had the benefit of some extra power thanks to the Fan Boost Award, and with six laps remaining he had cut Mortara’s lead to just 1.8 seconds. However, three laps later Mortara regained his advantage, even nudging it up to 3.1 seconds. By then, he was looking solid for the victory when the unthinkable happened as he spun in the hairpin to find himself looking right at Abt and Rosenqvist as they drove past.

“It’s difficult to find the words after a race like that. It’s tough to swallow,” said Mortara. “We had the pace today. At some point, I wanted it too much, and made a stupid mistake. You have to admit it when this happens. But, I think everyone can expect a strong Venturi team this season.”

Race 1 winner Sam Bird qualified in fourth, but a 10-place grid penalty for his pit-lane incident during Saturday’s race forced him start from 13th. Nonetheless, he drove steadily through the field to finish sixth – including a replay of the great pass he made for the lead yesterday, albeit this time only for sixth place on Oliver Turvey.

Last year’s champion and runner-up Lucas Di Grassi and Sebastian Buemi both had a weekend to forget. Di Grassi for his part came away pointless from a race weekend for the first time in his Formula E career.

In just over a month, the series will resume in North Africa with the Marrakesh E-Prix.