MILLER: Brian, it’s been a hell of a ride

MILLER: Brian, it’s been a hell of a ride

Considering our history, trying to summarize Brian Barnhart’s past 23 years might require more finesse than these fingers can muster. When you tag someone with a nickname and then beat him up in print for the better part of 15 years it’s not easy to paint an unbiased picture.

When I first coined it years ago, “The Great Brian Barnhart” (TGBB) took on a life of its own. He was cannon fodder for Miller’s Mailbag on RACER.com for months at a time, and petitions to get rid of him were constantly suggested.

Depending on your perspective, he was an invaluable asset for IndyCar or an ass who was given way too much power. When Tony George made him judge and jury of the Indy Racing League, it seemed like a bad dream. A former mechanic with no driving experience was going to officiate the races by himself?

Early on, when I stood next to Race Control and listened to him scream at drivers during practice to back off and not run so close together (he could talk to all of them at speed) or he was going to throw a yellow flag, I was stunned. Your rules made pack racing the norm, and yet running close was forbidden? And you are yelling at veterans and telling them how to drive? It was unfathomable, and Barnhart’s jurisdiction seemed to have no boundaries.

Other things, like his no-passing zone at Long Beach, or when Helio had his win taken away at Edmonton because he used the preferred racing line, were almost comical. Others, like the 2002 Indy 500, was anything but a laughing matter. Had the observers been allowed to hit the yellow light button when Buddy Lazier and Laurent Redon smacked the wall in Turn 2, there would have been no controversy with Paul Tracy and Castroneves. 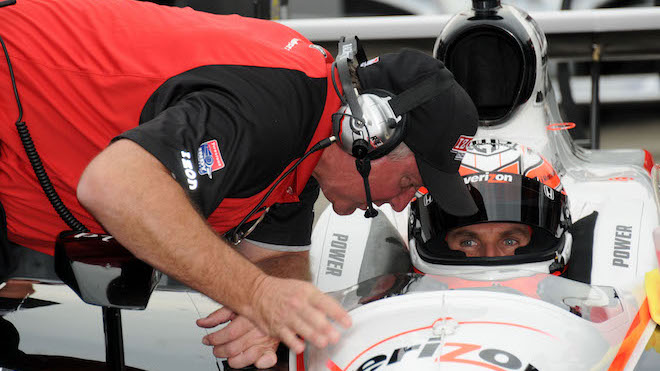 But Barnhart needed personal confirmation, and that time lapse created the firestorm that ended when TG ruled that TGBB’s ruling couldn’t be appealed (after Barry Green spent $100,000 proving Tracy was ahead when the yellow light finally came on) in what became one of Indy’s biggest-ever black eyes.

And, of course, the made-for-television qualifying drama of TGBB telling each driver to “gimmie four good ones,” got old in a hurry. Especially since each driver had nine attempts.

The Loudon rain race in 2011 was his final act, and a change was made when Randy Bernard hired Beaux Barfield to run Race Control.

A lot of people liked working with Barnhart, and he certainly did some good things. My problem was that his presence or decisions often overshadowed those of the drivers or the competition. And the chief steward should never be the news.

But the past few years I’ve watched Barnhart in a different role, and I have to admit he was damn good as Race Director. He ran the drivers’ meeting efficiently, knew the rulebook cold, mapped out the weekly chuckholes of a race program for the drivers and also reacted to whatever challenges the tracks presented. During Barfield’s tenure, Barnhart was director of operations and a big help to the new chief steward.

“I’ve got nothing but good things to say about Brian,” said Barfield, who is a logical candidate to become Race Director/Chief Steward. “He was an extra set of eyes in Race Control and fantastic for me because he would see things two laps before it happened. He was never emotional, always professional, and he had my back big-time.”

Barnhart seemed to relax over the past few years and lost that temper/arrogance he carried during the time he called all the shots. Being chief steward is a thankless job, but Barnhart’s experience made him perfect for Race Director. We buried the hatchet in 2015 and he’s been a delight to deal with ever since – even taking time each week to answer questions in the same Mailbag that used to light him up.

Brian was the Teflon Don to the end, and survived five different regimes before leaving on his own terms to take over Harding Racing.

The way Race Control is structured isn’t likely to change much because Jay Frye likes a committee, but finding Barnhart’s replacement as Race Director won’t require much searching. Tony Cotman and Barfield are the only two worthy candidates I can think of and both are available.

And if Barfield takes the job, TGBB is back in play.