IndyCar wanted its new-for-2018 universal aero kits to not only look amazing, but provide even better racing on the series’ wide variety of tracks. Early impressions say it’s mission accomplished on both counts.

If improving aesthetics had been the sole reason for the Verizon IndyCar Series’ decision to end the manufacturer aero kit era and introduce standard bodywork for the 2018 season, many would argue that it would have been justification in itself.

But performing a makeover on the visually-challenged Dallara DW12 was, despite the obvious need, just one of many goals packaged into the series’ sweeping overhaul of its spec cars. IndyCar competition boss Jay Frye and his team leaders Tino Belli and Bill Pappas sought to transform the DW12 into something that was stunning to behold, challenging to drive at the limit, and still fast enough in speedway guise to justify its status as weapon of choice for the Indianapolis 500. The list of wants also went deeper than the DW12’s surface. 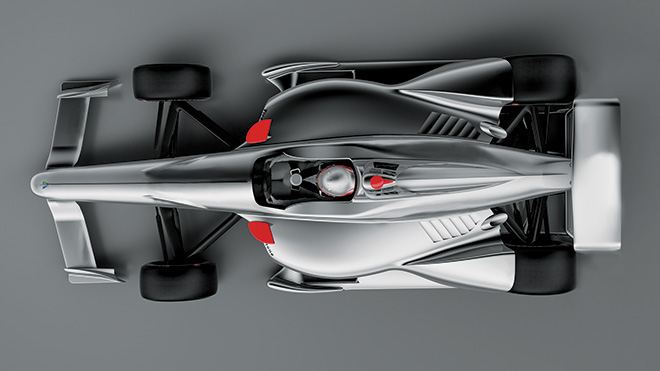 “A year or so ago, when we came out with this five-year plan, we did have an objective, a mission statement,” Frye says. “It was to enhance safety, ensure we had an entertaining on-track product, increase team involvement in vehicle development, and entice additional manufacturers to participate in the series.”

To take IndyCar out of its downforceloaded aero kit era and start anew, Chevy and Honda were the first stops on Frye’s buy-in tour. Asking them to cease aero kit production and save millions per year in development costs might go down as the easiest request IndyCar has ever made.

“We went to both of our manufacturers and explained what was going on,” Frye says. “Both had invested heavily in aero kit development, but they bought into our plan and objectives relatively quickly. They also understood that, in regards to recruiting a third engine partner, making the aero kit costs go away would help everybody.” 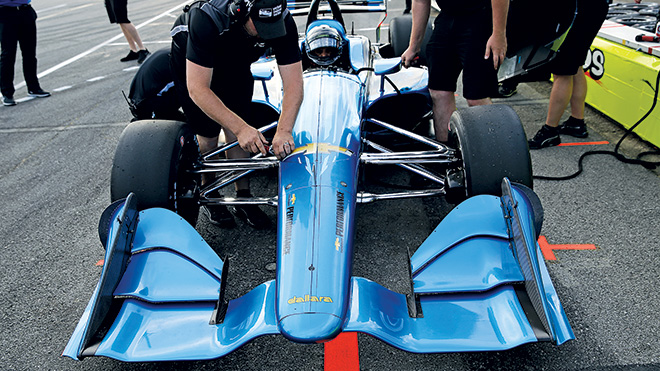 With Belli leading the aerodynamics team and Pappas looking after the mechanical updates, IndyCar’s competition department built a list of criteria for vendors to meet on a new universal bodywork package, brake system, and other upgrades that would aid the series in reimagining a DW12 chassis that made its debut back in 2012.

“I put out an RFP back in April of 2016 and from there we went through the various possible suppliers to try and decide who we would do the kit with,” Belli explains. “Bill and Jay gave their input and guidelines to me of how we wanted it to appear, and then I was tasked with doing the rest of it.”

A jumping off point for the aesthetics was the visual DNA of past racecars – the low-slung, turbo whistling rocket ships that preceded the sport’s spec era. After scouring the photo archives to build a scrap book of styling details from three decades of CART and Champ Car, Belli tasked UK-based design and styling consultant Chris Beatty with generating 3D concepts for what would eventually become the UAK18 – the 2018 universal aero kit, with versions for speedway and road course/short oval competition. The UAK18 kits would be produced by IndyCar’s existing exclusive chassis supplier, Dallara, at its American base in Speedway, Ind.

“Chris had some ideas, and also helped me visualize the UAK18,” says Belli. “He was very quick to run through lots of different concepts on the aesthetics, which helped us narrow it down and direct Dallara on which way we wanted the car to go.” 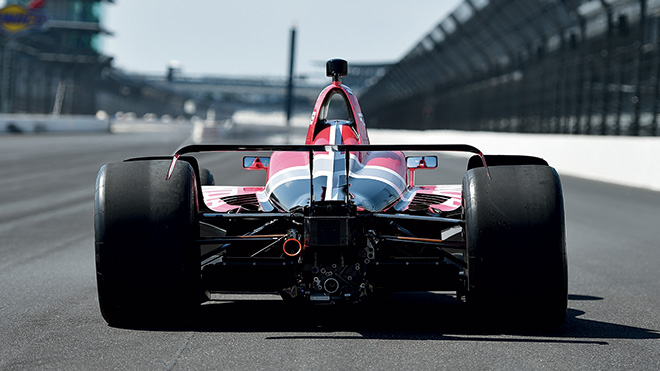