Classic 12 Hour at Sebring set for this weekend

Classic 12 Hour at Sebring set for this weekend

An amazing line-up of legendary racecars from the last 50 years and an even older collection of historically significant airplanes have descended upon Sebring International Raceway this week for the second annual Historic Sportscar Racing (HSR) Classic 12 Hour at Sebring, Pistons and Props, Nov. 29-Dec. 3.

Debuting last December, the HSR Classic 12 Hour at Sebring, Pistons and Props, presented by the Alan Jay Automotive Network, is an on-track and on-the-runways celebration of the 12 Hours of Sebring and historic Hendricks Field, the iconic military and civil aviation facility on which the famous sports car race has been run for 65 years.

The Classic 12 Hour at Sebring features three full-days of HSR historic and vintage sports car racing and a full “fly-in” and display of equally iconic military and civilian aircraft from the last half century and beyond.

The Classic 12 Hour will feature four period-correct Run Groups that will each take to the legendary Sebring International Raceway four times this Saturday and Sunday. In tribute to Mobil 1 Twelve Hours of Sebring, which will be run for the 66th time this March, Saturday’s schedule features 12 continuous hours of racing straight into the night. Each Run Group will take to the track three times Saturday before returning late Sunday morning for the fourth and final races of the weekend that will decide this year’s Classic 12 Hour winners.

Group A: 1952 – 1972: The oldest and perhaps most memory-stirring division, Group A features such legendary racecars as the Ford GT40, Lola T70, Chevron B16, McLaren M1B, Lotus 23B and a full lineup of production-based GT machines that includes 1960s-era Corvettes and Mustangs and a strong field of early Porsche 911s. Two entries to keep an eye on for the overall Group victory are the returning 1966 McLaren M1B of British drivers Nigel Greensall and Andrew Beaumont (pictured at top) and former HSR Classic 24 Hour at Daytona winner Toni Seiler, who co-drives a 1969 Lola T165 with Martin Wachter. 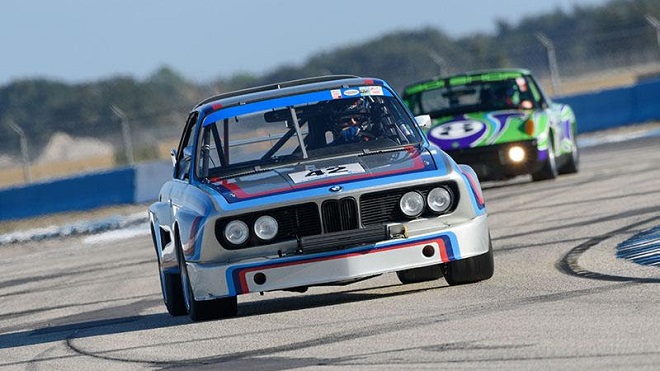 Group B: 1973 – 1993: Evoking the same emotion and memories of Group A with a little more turbo-power and wide-body aerodynamics, Group B has been expanded to include the two-decade “golden era” of the original IMSA GTX, GTO and GTU categories and comparable FIA GT classes of that time, including Group 6 prototypes. Group B is home to the crowd-favorite 1980 Jagermeister Porsche 935 K3 of co-drivers Mike Smith and Dave Smith, the equally popular 1973 BMW CSL (pictured above) of Dick York and David Russell and several quick and nimble Porsche 911s of various generations. John Harrold will also be looking for his third-straight “HSR Classics” Group B win after taking the inaugural Classic 12 Hour victory last year and his first Classic 24 Hour at Daytona win earlier this month. Harrold co-drives his quick 1979 Chevron B23/36 with his son Ryan Harrold.

Group C: Historic but familiar, Group C features prototypes from the last few decades that never had a chance to race head-to-head in their prime. Daytona Prototypes, LMP1 racecars and earlier era WSC, GTP and FIA Group C models are all eligible in this division. Group C is also home to later generation IMSA GTS machines up to the more recent GRAND-AM, FIA and IMSA GT1, GT2 and GT3 racecars. Highlight entries include Travis Engen and his always competitive 2005 Audi R8 LMP1 (pictured below), Tony Burgess and Chris Dyson in a 2006 Lola/AER B06/10 and the European-based 2015 Oreca 03R of Niki Leutwyler and Michel Frey, to name a few. Several Daytona Prototype entries includes the 2010 Corvette DP John Reisman will co-drive with Eric Curran, who won the 2016 IMSA WeatherTech SportsCar Prototype Championship with then teammate Dane Cameron. Retired modern GT racecars will also be part of the Group C action, including a 1993 Porsche 964 Turbo S two-time 12 Hours of Sebring class winner Dion von Moltke will co-drive with Frank DePew.

Group D: Another showcase of retired racing machines just past their competitive prime, Group D features several types of early GT3, World Challenge and various “Cup” and “Challenge” racecars. That all translates to Group D being a classic Porsche versus Ferrari battle with various 911, 993, 964, 996, 997 and Cayman models carrying the honors for the “Goldcrest” and 360 Modena and 430 GT2 and GTC machines waving the “Prancing Horse” flag. 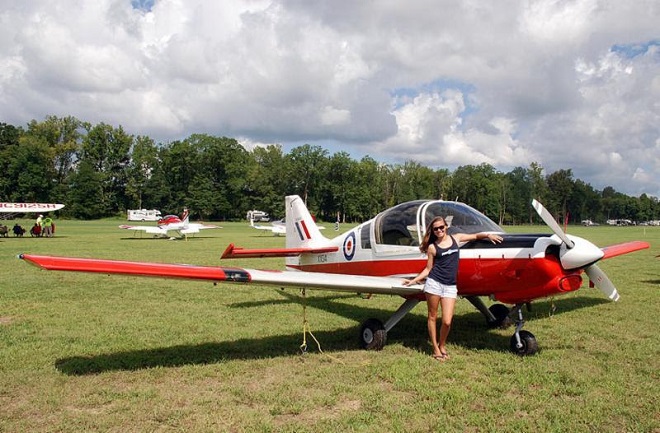 The on-track HSR racing action is just part of the Classic 12 Hour at Sebring, Pistons and Props. Still in part an active airport, Friday afternoon will once again see the arrival of vintage aircraft on one of the Sebring runways. The planes will later taxi into the paddock to be displayed right alongside the historic racecars.

Historic airplanes scheduled for Sebring this weekend include aircraft spanning many decades that were used by the United States Army, Air Force and Navy and the British Training Command. The rare line-up includes a 1973 Bulldog 120 and a 1942 Stearman.

The Bulldog was manufactured by Scottish Aviation LTD and was initially exported for use by the Ghana Air Force. After a short career as a trainer, the Sebring-bound Bulldog (pictured below) was purchased and relocated to England where it was restored and painted in British RAF XX514 livery, a tribute to the original XX514 that was written off as a total loss in September of 1986. The plane came to the U.S. in 2013 and, after initial stops in Michigan and Arizona, now resides in Florida and is regularly flown by owner Tony Green. 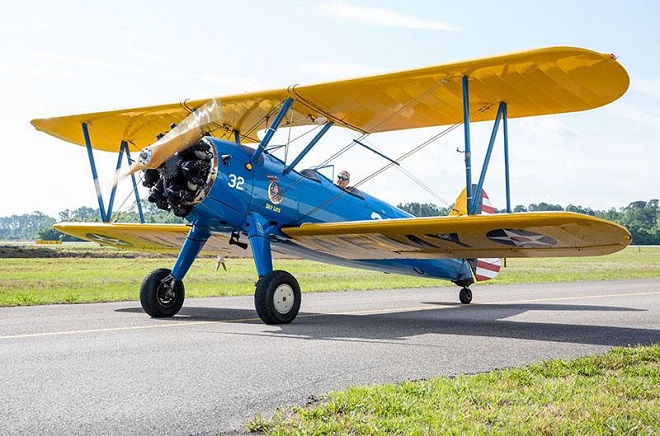 A biplane design, Stearman served as “Primary Trainer” aircraft for both the Air Force and in the Navy as the N2. Primary training was the first of three phases of military cadet training during WWII. The pristine example coming to Sebring, owned and piloted by Bryan Miller (pictured above), was originally built as a Navy N2-S3.

Classic 12 Hour tickets can be purchased on-site only throughout the weekend with sales commencing at the Sebring International Raceway Main Gate the morning of Thursday, Nov. 30.

Advance Classic 12 Hour on-site ticket sales will also be available at HSR Registration at Sebring International Raceway Wednesday, Nov. 29, starting at 1 p.m. EST. Ticket access to the facility is not permitted until the end of today’s final test session, which is scheduled to start at 5:05 p.m. ET.

Detailed event information for the Classic 12 Hour and Sebring Historics, including weekend schedules and all entry lists, is available at www.HSRRace.com.