Proving once again this his No.1 SCORE Trophy-Truck championship plate was no fluke; young Carlos “Apdaly” Lopez crushed the competition in taking the overall four-wheel victory today at the historic 50th anniversary running of the BFGoodrich SCORE Baja 1000.

Driving his familiar bright orange, RPM-sponsored, Geiser Brothers-built Chevy, Lopez made the 1,134.4-mile trek from Ensenada to La Paz in a time of 20 hours and three minutes, good for an average speed of 56.58 mph. His performance also netted the two-time SCORE Trophy-Truck champion a special $50,000 bonus from race title sponsor BFGoodrich for taking the race’s overall victory. Like many of the 39 other Trophy-Trucks in the class, Lopez was running on the brand’s specially-built 40″ KM3 tires.

In third spot just 11 minutes later was the No.23 TSCO-built McMillin Racing Ford piloted by Dan McMillin of El Cajon and joined for the first time by Gary Weyhrich.

At the halfway mark on Thursday evening, the No.11 Ford of two-time defending race champion Rob MacCachren, Jason Voss and Justin Smith trailed the No.83 truck Andy McMillin/Gustavo Vildosola Jr. truck by seven miles in his pursuit of the lead position. Trailing Andy McMillin and MacCachren was McMillin’s cousin, Luke, 24-years old from San Diego, also in a Ford-150 SCORE Trophy Truck followed by Lopez, who hails from Tecate, Mexico. However both MacCachren and Andy McMillin’s races were soon over thanks to blown engines.

Included in the 405 official starters in the elapsed-time race were 300 cars/trucks/UTV and 105 motorcycles/quads. The total number of entries is the third-most in the 50-year history of the SCORE Baja 1000 and the second-most in the 21 years it has finished in La Paz. 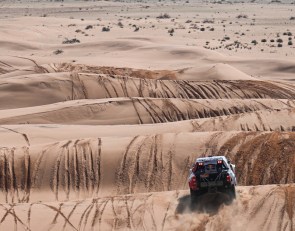