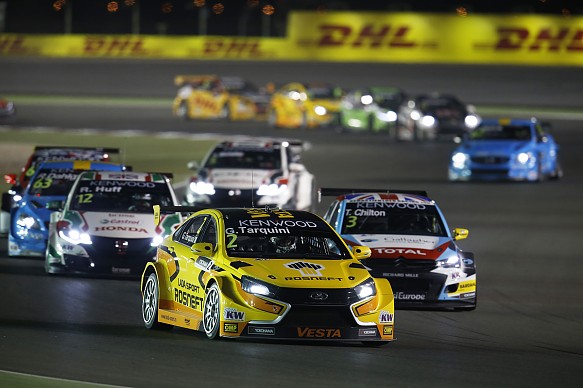 Gabriele Tarquini marked Lada’s final event in the World Touring Car Championship with victory in the opening race in Qatar, coasting clear in a hectic race.

The Italian took the lead of the race on a restart after a red flag period, and quickly charged away to his 22nd WTCC win as second-place finisher Tom Chilton backed up the pack behind.

Reversed grid polesitter Chilton held his lead on a chaotic opening lap by beating Tarquini to the first corner, while Rob Huff jumped up to third despite being squeezed onto the grass by Honda teammate Tiago Monteiro.

That move shuffled Monteiro back through the pack, but as the Portuguese attempted to claw back ground, his exit off Turn 7 brought him across the front-left corner of Jose Maria Lopez’s C-Elysee and pushed him sideways into the path of the hapless Hugo Valente, who hit Monteiro. The incident broke both of Monteiro’s rear suspension arms – his woes being compounded as he hit a tire barrier while sliding wide – and also forced Valente into retirement.

While the safety car was initially deployed, the race was red flagged two laps later with Monteiro’s car stuck on the outside of the track having not been recovered by marshals.

The race was resumed a quarter of an hour later, with Tarquini immediately prising the lead from Chilton’s grasp off a rolling restart with the Italian pulling off a great dummy move.

Tarquini went to the outside, forcing Chilton to dive deep into the first corner before swooping back inside the C-Elysee as Chilton missed his braking point. From there the Italian raced away at the front, setting the fastest lap by more than six tenths, and though he backed off on the final lap he still eased home to a comfortable winning margin of 5.321 seconds.

Sebastien Loeb Racing driver Chilton defended far better in the remainder of the event to keep Huff behind him, Chilton ensuring his Citroen was wide enough to rebuff his compatriot’s attempts to pry second away from him.

Behind Huff, four-time champion Yvan Muller steered his way to fourth in his penultimate race in the WTCC, while Norbert Michelisz claimed fifth in the second works Honda.

The Volvo Polestar S60s of Thed Bjork and Robert Dahlgren came home sixth and seventh – the latter scoring his first WTCC points since 2011 – with Nick Catsburg finishing a provisional eighth while an incident between himself and James Thompson continues to be investigated.

Muller’s Citroen teammate Lopez recovered to ninth after his involvement in the opening lap clash, ahead of Thompson, who completed the points.