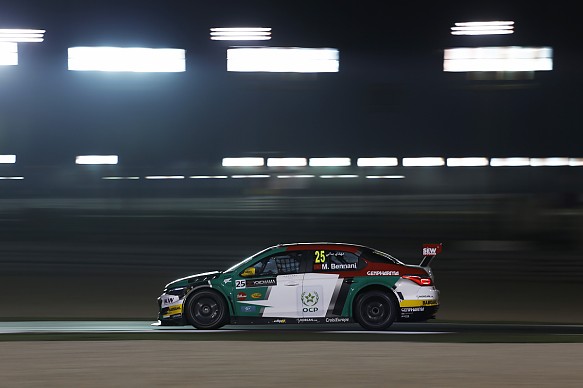 Mehdi Bennani followed up his first World Touring Car Championship pole position with victory in the final race of the season in Qatar.

The Moroccan claimed his first qualifying pole position in the championship on Friday, and fended off a late challenge from Volvo’s Thed Bjork to claim his third career win, leading every lap in the process in his Sebastien Loeb Racing Citroen C-Elysee.

Bennani converted pole into a first-corner lead, and was able to make a brief break as factory Citroen counterpart Jose Maria Lopez muscled his way past Bjork for second.

A safety car – mandated after Robert Dahlgren ground to a halt in the second Volvo S60 following contact with Tom Chilton – bunched the pack back up, but Bennani stretched an advantage once again when racing resumed on lap four.

With Lopez unable to keep pace with the race leader, Bjork became increasingly frustrated in third and pounced for second at Turn 1 two laps after the restart, before setting off to catch Bennani. Swede Bjork had done just that by lap eight, and spent the majority of the run to the finish stalking the SLR driver’s every move.

While Bennani was able to pull a gap through the infield section of the Losail circuit, Bjork was consistently able to tow up to his rear on the long run down to the first corner. But Independents’ champion Bennani was offered some respite two laps from the end when Bjork ran wide exiting Turn 4 and dropped off his tail. That gave Bennani enough breathing space to control his run to the finish over the final lap and a half, beating the Volvo S60 Polestar to the line by 1.176 seconds to claim his second win of the season.

Lopez ended his spell in the championship with a 48th podium (including wins) in a lonely third, ahead of a scrap for third overall in the drivers’ points.

Having worked his way past the departing Yvan Muller for fourth, Norbert Michelisz provisionally inherited the championship position – with the 12 points for the place enough to leapfrog him ahead of Honda teammate Tiago Monteiro.

But Monteiro – who only made it to the grid following a mammoth repair effort from his team after his car was badly damaged in a race one shunt – fought back after being passed by Gabriele Tarquini early on to move back to within a point of Michelisz. The Portuguese driver then executed a pass on Muller on the final lap to snatch fifth, moving back in front of Michelisz to secure third place overall.

Having won the opening encounter, Tarquini was the only Lada driver to finish and brought his Vesta home in seventh behind Muller, with an unwell Rob Huff claiming eighth – that result allowing Bennani to overtake him for fifth in the drivers’ championship.