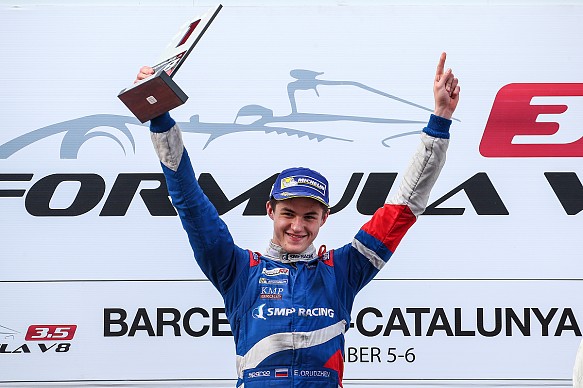 Key to Orudzhev’s success was a repeat of his stunning start from Jerez a week earlier; on both occasions the SMP-backed car launched from fifth on the grid into the lead by Turn 1.

“My only fight during the race was at the first corner with [Tom] Dillmann,” said Orudzhev. “I knew Tom could not afford to take a big risk, so I decided to be aggressive.

“After that, the pace in the car helped make things comfortable for me, and I don’t think I made a single mistake.”

The Russian’s faultless and unchallenged drive helped accentuate attention on an engrossing battle for second between championship leader Louis Deletraz and his closest points rival Dillmann.

Polesitter Dillmann held Fortec’s Deletraz at guard until lap 19, when the Renault Academy driver gained a slipstream on the AVF car along the pit straight.

Dillmann covered the inside line, but he locked up and missed the apex, taking to the asphalt run-off.

Deletraz took advantage to grab second place, and once in clear air he extended a 2.4s advantage over Dillmann at the checkered flag.

“I had to try and brake late,” said Dillmann. “If I hadn’t attempted to do so, Louis would have passed me anyway. “I am very happy that we’ve shown that we’re back on the pace.

“I couldn’t do anything about Egor’s monster start, and then later in the race I was suffering from rear tire degradation.”

The result gives Deletraz a six-point lead over Dillmann in the drivers’ standings. Of the seven drivers who arrived at the Circuit de Catalunya in contention for the drivers’ crown, only these two can lift the title in the final race of the season on Sunday.

Orudzhev’s progress from fifth at the start was assisted by third-qualifier Jack Aitken stalling his RP Motorsport machine and causing the first attempt at a start to be aborted.

The Frenchman developed a problem that caused him to lose three seconds a lap to the leaders and retire on lap 15.

Vaxiviere’s SMP Racing teammate Matevos Isaakyan ended the afternoon in fifth, ahead of Vitor Baptista, who ran through the gravel at Turn 7 on the last lap in his pursuit of the Russian.