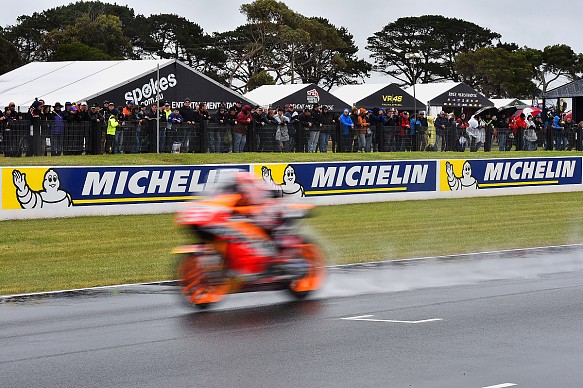 Ducati stand-in Hector Barbera was fastest in second MotoGP practice for the Australian Grand Prix, a session that was essentially washed out.

Rain at Phillip Island set in on Friday, and conditions deteriorated between the first and second sessions, while air and track temperatures also dropped by several degrees.

Primarily due to concerns over standing water, the start of practice two was initially delayed by 45 minutes. Only seven riders braved the weather when pitlane opened, with Avintia Ducati regular Barbera – standing in for the injured Andrea Iannone with the factory team – setting the fastest time. While his 1m51.958s was 2.060 seconds faster than his Avintia replacement Mike Jones, it was 11.001s slower than Cal Crutchlow’s first practice benchmark.

Practice was then canceled at 4:30 p.m. local time – 45 minutes after the original, delayed start – with no word yet on any possible changes to the schedule.

LCR Honda’s Crutchlow did not bother getting into his leathers, with Tito Rabat, Danilo Petrucci, Aleix Espargaro and Valentino Rossi joining Barbera in recording a time, while Loris Baz and Scott Redding also tested the conditions but not for a full lap.

Rossi will be hoping for improved conditions in third practice on Saturday morning, to book a guaranteed place in Q2, having been stripped of second place in first practice.

Rain is currently forecast to continue on Saturday, but clear on Sunday.