MOTOGP: Qualifying traffic 'like the center of Rome' - Rossi

MOTOGP: Qualifying traffic 'like the center of Rome' - Rossi 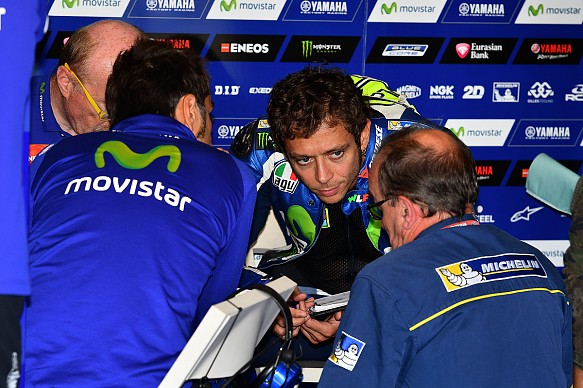 Valentino Rossi says the MotoGP traffic that hampered his bid to take pole for the Czech Grand Prix was “like the center of Rome.”

Rossi was fourth after the first runs in qualifying at Brno, half a second off the pace set by his Yamaha teammate Jorge Lorenzo at the time. However, he was not able to improve on his second run, unlike Marc Marquez, Lorenzo and Andrea Iannone who will share the front row of the grid and Suzuki’s Aleix Espargaro who jumped up to fourth.

That left Rossi sixth – 0.913 seconds slower than Marquez and lamenting traffic in the closing stages.

“I’m not happy because I have to start from the second row,” he said. “It is a shame I wasn’t able to make one clear lap because we have a better potential – I think we could start from the front row.

“I started with the harder [front tire] and I did already [1m]55.5[s] but I knew that I had half a second of margin because I could use the soft in the second exit. But unfortunately in the second exit everybody was waiting – I was stuck in the traffic.

“It was like staying in the center of Rome, everybody opened the throttle and then was waiting and braking. It was a big disaster – I tried to make a lap but I was in the confusion.”

Rossi was unwittingly part of Marquez’s pole lap, when he was passed by the Honda rider at the final corner, while trying to give himself space for his own final flying lap behind Pol Espargaro, immediately ahead on the road.

“I arrived too quick to Espargaro and I wanted to wait for an overtake on the straight,” he said. “But when I slowed down to exit faster, I didn’t know I had Marquez behind so this also was a problem for my last lap.”

Rivals consider Rossi in the fight for the win on Sunday, but the Italian is wary of forecast cooler conditions and the chance of rain.

“The second row is more difficult, but it is still possible to fight for the podium if you have a good pace,” he said. “In [fourth practice] I was not so bad, my pace is quite good.

“Now the bigger question mark is how are the weather conditions tomorrow because first of all we need to understand if it will be dry or wet. But the temperature will also be very important because if we are more cold than today – like everybody says – it is more difficult with the front tire and more tricky for everybody. So we have to wait for tomorrow and see where the conditions are.”