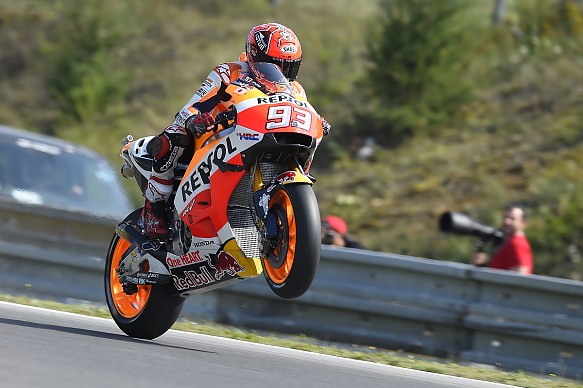 Honda’s Marc Marquez acknowledges the slipstream he got from MotoGP rival Valentino Rossi at the end of Czech Grand Prix qualifying helped him take pole position.

The championship leader claimed his fifth pole of the year at Brno with a stunning lap set in the final minute to finish 0.253 seconds ahead of Yamaha’s Jorge Lorenzo. Marquez found 0.694s to take pole, even with passing Rossi at the final corner and slotting in directly behind Pol Espargaro’s Tech3 Yamaha.

“I found, honestly, the perfect lap,” he said. “I overtook in the last corner, but I had a small slipstream from Valentino and this helped me quite a lot to get pole position.

“Maybe with Pol I lost some time in the last corner, but the time that I gained during all of the lap with this small slipstream was much better. I didn’t expect to be on pole and I didn’t expect this lap time.

“Normally I would ride alone but this time I found a good slipstream and maybe this slipstream gave me pole.”

While Marquez led the way in Friday’s second practice session, he conceded he had work to do on his race pace. He estimated improvements on that front in fourth practice closed his deficit from half a second to one tenth, which he said could prove more important than taking pole.

“I’m happy for pole, but maybe I’m happier for FP4,” he said. “During the whole weekend I was struggling with the used tires, and in FP4 we changed the set-up and I was able to ride in a good pace, similar to Lorenzo.” 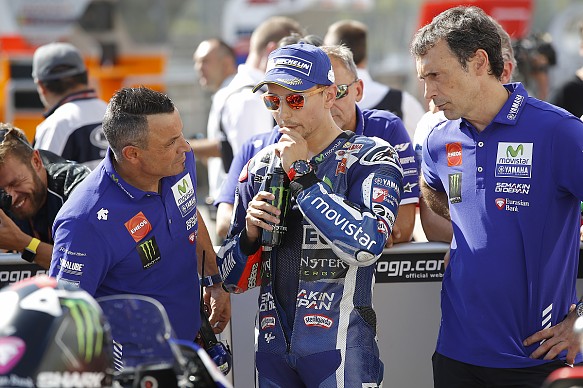 Lorenzo made a statement on Saturday morning when he recorded what was – before Marquez’s pole effort – the fastest MotoGP lap around Brno to top third practice by 0.744s.

He was also ahead in qualifying by four tenths before Marquez’s lap, but felt he paid the price for riding too aggressively at the end.

“After the morning that I made this lap time, I expected to be much quicker in the afternoon,” he said. “But a little bit because the temperature was up, and maybe with the second tire I was too aggressive, braking too late and maybe opening too much throttle, I didn’t improve so much compared to the first lap time.

“The lap time from Marquez was impressive; he was really fast – I didn’t expect him to be so fast. Maybe the riders in front gave him the last push.

“Today we expected pole position but second place is a very good place to start tomorrow, knowing that we have a very good pace with old tires and we worked very well to keep a consistent pace.”