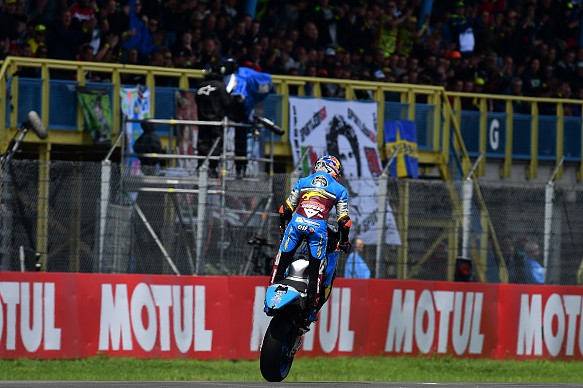 The Australian graduated to the premier class directly from Moto3 in 2015, on a three-year deal with Honda, and switched from LCR to Marc VDS for the ’16 season. Miller was 20th in the points and had battled injury and form before taking his breakthrough victory at Assen last month, and has received confirmation that he will stay on and see out the deal.

“I have really found a home inside that team and I am delighted to be staying with them for 2017 as well,” said Miller, now 13th in the championship, in a MotoGP.com interview. “I think they also really like me and everything seems to be really good. I am in a happy place.

“It is a team where they really enjoy my personality; they are a special kind of team. They are so open and just want to help me in every aspect of racing, it’s great.”

Miller’s rookie teammate Tito Rabat has also found the going tough in 2016 but is expected to continue.

Confirmation of Aleix Espargaro’s 2017 move from Suzuki to Aprilia during the Dutch TT weekend was the last of MotoGP’s factory rides to be locked in. Attention now turns to the satellite outfits, with LCR Honda (Cal Crutchlow) and – in all likelihood – Marc VDS now accounted for.

Tech3 is expected to announce that reigning Moto2 champion Johann Zarco will ride its second Yamaha before the German Grand Prix on July 15-17, alongside the previously-signed Jonas Folger. That leaves the three Ducati outfits yet to outline plans, but Scott Redding and Danilo Petrucci are expected to stay with Pramac.

Laverty has discussed the notion of returning to the World Superbike Championship, in which he won 13 races between 2011-’14, if he cannot be upgraded to a year-old Ducati at least compared to the aging GP14.2 he is racing this year.

Hector Barbera is set to continue with the Avintia team, where Loris Baz’s future is less clear.