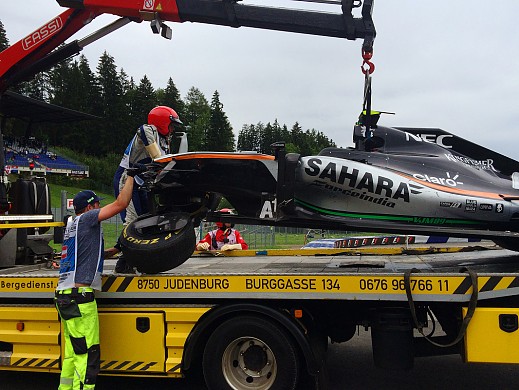 Force India is demanding the FIA review Formula 1’s radio restrictions after being unable to inform Sergio Perez of the brake issue behind his last-lap Austrian Grand Prix crash.

Deputy team principal Bob Fernley claims he was informed by race control not to pass on information to both Perez and Nico Hulkenberg regarding their brakes.

Perez’s failed on the last lap, six laps after Hulkenberg had to retire his car due to a similar problem.

“We’ve got to look at the radio communication bit because we were not allowed to tell the drivers their brakes were critical,” Fernley told Autosport.

“It’s a bit worrying. It seems a bit silly putting a halo on a car but not being able to tell a driver his brakes are about to go.”

Suggested to Fernley the brake issue was a safety concern and therefore an area where a driver could receive information, he replied: “We were informed by race control not to inform the driver.

“We need to talk to them about that, because that’s probably a little bit too far. I think we have to take drivers’ safety in control. It probably wouldn’t have made a difference to Checo at the end of the day, but it’s just an example of something we perhaps need to look at.”

The second item on the list of permitted radio information is: “Indication of a critical problem with the car.

“Any message of this sort may only be used if failure of a component or system is imminent and potentially terminal.”

Nico Rosberg suffered a brake-by-wire failure on his Mercedes on the penultimate lap and again the team was unable to make him aware.

Asked by Autosport if he was frustrated with the radio ban, Wolff replied: “The FIA’s not in an easy position because what is the limit? Teams might easily abuse it, and under the title of safety try to communicate with the drivers.

“My opinion is we probably went a little too far in what is restricted. Opening it up is actually Bernie’s [Ecclestone] suggestion, not my idea. Maybe not the driver coaching bit, that’s the only thing.”

Autosport understands the FIA feels making adjustments to the rules would potentially open them up to abuse, with teams passing on additional messages under the pretext of safety.