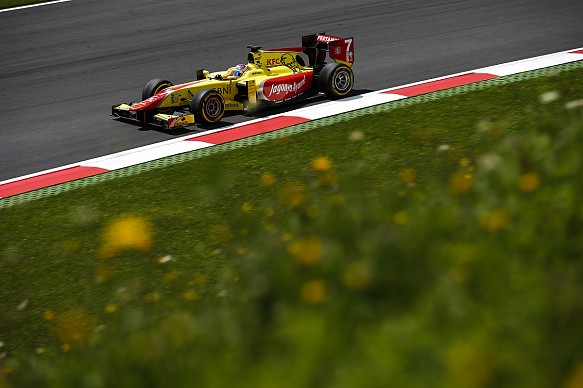 The GP2 Series will continue to use its current car for an extra season, until the end of the 2017 campaign.

The decision to stick with the existing Dallara GP2/11, which was due to be phased out at the end of this season, has been made for cost reasons.

It also means that the series’ existing teams can compete for one more season before deals are renewed – which in GP2 traditionally coincides with the introduction of a new car – in 2018.

Series boss Bruno Michel told Autosport: “We decided that because of the general economic situation we are going for one more year to do the same thing, to give an extension to the teams for one more year as well.

“Even if the series is doing fine we always need to be quite careful because there are not thousands of drivers ready to come and cover the budget in GP2, and in GP3 as well. After discussing with the teams it was better not to have to buy two new cars for next year, to give a bit of time to see how things are for racing in 2018.”

Although Michel would not be drawn on the current stalemate regarding the FIA’s negotiations with GP2 for the series to be rebranded as Formula 2, this does also give several more months for a rapprochement between the two parties.

It also gives a period of grace for GP2 to decide whether to introduce the new halo cockpit-safety device that will be used in Formula 1 next season.

“If we wanted to introduce the halo system, we would have to make some very heavy modifications on the chassis and I think it’s going to be too costly for next year, but of course we’ll consider it on the new car,” added Michel.

DAMS boss Francois Sicard supported the move to delay the new car until 2018.

“It’s a really good decision from the organizers,” said Sicard. “To invest in a completely new car is difficult when the economic situation is not the best, and it means also that they can prepare the new one; I know they have some innovative ideas, with a completely new engine. Then they can present the car ready to race without all the usual new-car issues.

“The [existing] car has extremely good performance, and is a really good tool to train drivers for Formula 1, so I think this is the right decision for the right time.”