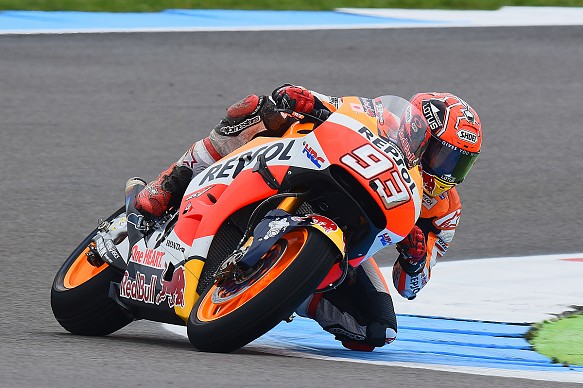 Marc Marquez will continue to race Honda’s 2014 MotoGP chassis this year, believing its latest version does not offer enough of an improvement.

After winning titles in his first two seasons, including victories in the first 10 races of 2014, Marquez struggled to tame last year’s Honda.

Following a run of three falls in five races, he reverted to the 2014 RC213V at Assen and stuck with it for the balance of the season.

Marquez is using it again this year, but tested an upgrade at Barcelona following the Catalunya Grand Prix, running Marquez viewed as vital for his championship bid.

While teammate Dani Pedrosa is now racing that chassis, Marquez did not feel it offered enough to warrant a switch.

With Honda still working to reduce its acceleration deficit, Marquez is relying heavily on the front end of his bike to recoup that lost time under braking.

He said that confidence was ultimately a key factor in his decision not to change to the new chassis.

“The 2014 chassis is the one that last year I came back to, and still I am using it,” he said. “It gives me a lot of confidence with the front tire. We are trying to find the best components to adjust the back end of the new chassis.”