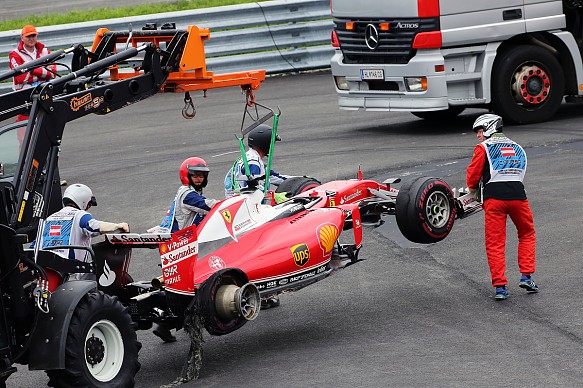 The Ferrari driver retired from the lead of the race when his tire exploded at the start of lap 26 of 71, as he tried to stretch his first stint as far as possible.

Vettel said there were no warning signs in the car that his tires were in trouble, and he went to the Ferrari pitwall when he returned to the paddock to see if the team had any further idea.

“The tire exploded out of the blue,” he said. “No signs before that, everything was normal.

“Everything was the same as the lap before, no signs of the failure. It’s completely a question mark on why the tire failed.”

Vettel does not believe Ferrari was pushing the boundaries by trying to stretch its tire life.

“It was clear everybody had much more tire life than expected, so 27 laps is not much on that [super-soft] compound,” he said. “Everybody was trying to go longer on the tires.

“Kimi [Raikkonen] did more than 20 laps on the ultra-soft, there were other people who did more laps on the super-soft. So out of nothing, the tire exploded.”

Pirelli said it is trying to analyze the failure, although it has very little to work with given the whole tread was lost in the incident. The tire maker also said initial claims the failure was caused by debris were wide of the mark, as there is no proof yet of the cause.

However, analysis of the super-soft tires Raikkonen used in his opening stint – pitting on lap 22 – showed high wear, which can make the rubber more susceptible to debris or damage suffered by running over curbs. Ferrari team boss Maurizio Arrivabene said part of its investigation would look into the fact that Vettel was the only driver to suffer a failure.

“We are talking with Pirelli to understand the reason,” he said. “Other teams were running without any problem. This is really strange.

“Seb, without his tire failure, he was [going to finish] very high on the podium. I don’t know where, but very high.”