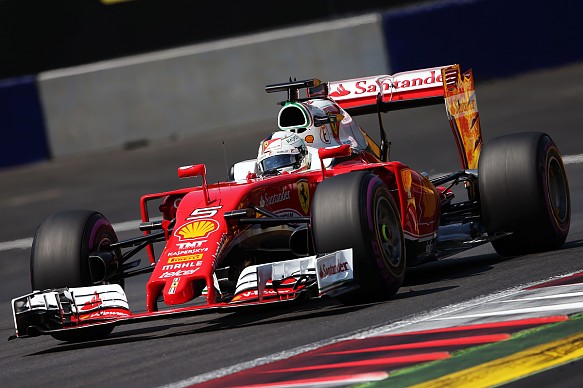 Ferrari drivers Sebastian Vettel and Kimi Raikkonen have admitted they should have pushed harder in drying conditions at the end of Austrian Grand Prix Formula 1 qualifying on Saturday.

Ferrari enjoyed a one-two in final practice, but its hopes of battling Mercedes in a straight fight for pole position were dashed by rain at the end of Q2, which led to a drying track in the crucial Q3 session.

Vettel ended the session fourth fastest with Raikkonen sixth, although the former then has to take a five-place grid penalty for a gearbox change.

“It was a question of how much risk you were taking and when you crossed the line – the later the better,” said Vettel. “With hindsight, I wasn’t taking enough risk. I should have taken more.

“In these conditions the only reference is the lap before, and taking into consideration that it’s drier the next lap, but you don’t know how much.

“It’s a bit of a shame we didn’t get to see a head-to-head in Q3 with two sets of ultra-softs [per car]. It was looking very good this morning.”

Raikkonen said several factors worked against Ferrari after its strong performance in practice.

“In the end it’s disappointing to finish sixth – there was more to come,” said the Finn.

“For many small issues or reasons we didn’t go faster, but we have to look at ourselves and take that blame. I’m sure I could have done a better job, but many small things could have been slightly better. I should have pushed harder – it was hard to know where the grip was.

“It’s not a disaster. The car has been working well all weekend, and it’s not too bad with some other guys getting penalized.”

Ferrari and Red Bull both managed to get their drivers through Q2 on the super-soft tire, meaning they get to start on a better race tire than the ultra-softs used by Mercedes.

Mercedes then tried to react by sending its drivers out for a super-soft run at the end of Q2, but the rain meant Lewis Hamilton and Nico Rosberg had to abandon their attempts to switch their race-start compound.

“The tire life will be a challenge for everyone, so whoever makes the tire last best will benefit in the race,” said Raikkonen. “Is it going to be a big advantage tomorrow? It depends on the weather.”

Vettel added: “We think it’s an advantage, otherwise we would have gone for the ultra-soft. Other people had the same thought – some succeeded and some didn’t.”