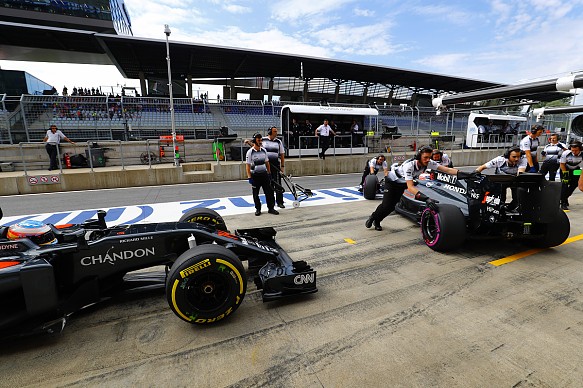 The FIA has issued its latest clampdown on the potential manipulation of Formula 1 tire pressures by some teams ahead of this weekend’s Austrian Grand Prix.

Teams have been employing a variety of methods this season to alter tire pressures before fitting them. One apparent process has involved teams putting heat into the brakes, so when the tire is mounted the heat is transferred into the rim, increasing pressure.

In consultation with Pirelli, FIA technical director Charlie Whiting has issued a directive aimed at preventing such practices. On Friday morning ahead of first practice at the Red Bull Ring, Whiting issued a note to all teams outlining the changes that take place with immediate effect.

The note states that during practice sessions, qualifying and the race, “the minimum starting tire pressures, as set out in the Pirelli preview for each event, will always be checked before the wheels are fitted to the car.”

It adds: “These checks will only be carried out on new tires or used tires from a previous session” and done in the presence of, and verified by, the team’s designated Pirelli engineer.

Whiting also makes it clear that once the tire pressure is set, no air may be released from them, but it can be added. If a set of tires is used more than once in any session there will be no requirement to reset the pressures to the minimum starting pressures.

When cars are on the grid, the note states that “again the starting pressures will be checked before the wheels are fitted to the car” and “once set no air may be released… but air may be added.”

Even with the changes, there remain concerns about other mechanisms employed by the teams to alter pressures. They include methods using the tire temperature blanket, as well via as the cooling duct during a cooldown lap while on track to lower the starting pressure.