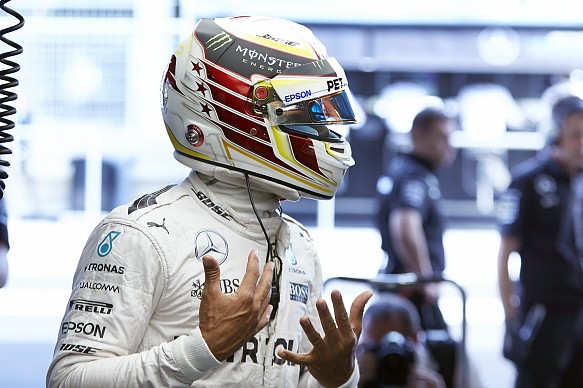 Formula 1 world champion Lewis Hamilton will move onto the last of his allocated Mercedes turbochargers and MGU-H units for 2016 in the Austrian Grand Prix.

Hamilton will use a fresh F1 power unit this weekend, with one new component of every element, taking his turbo and MGU-H tallies up to five.

He is on his third internal combustion engine and MGU-K and fourth energy store and control electronics.

Grid penalties kick in once the sixth of any of the six power-unit elements are used, and Hamilton has already said he considers them “inevitable” before the season is out.

Hamilton will now face a 10-place grid penalty the next time he replaces either his turbocharger or MGU-H.

“I will try to find a circuit where I feel I will be able to get the furthest up, and maybe a track where I might be able to catch up, even challenge for the win, that’s my thought process,” he said of planning for looming penalties. “I have to go into it thinking I can still win it. There could be safety cars, there could be all sorts of things, obviously I have to have an optimistic view on it.

“The chances of Nico [Rosberg] winning and me finishing second or further back [in races I take a grid penalty] is obviously higher. We’ll just have to deal with it and try to work our way through it.”

All of the other seven Mercedes-powered drivers in the field – teammate Rosberg and the Williams, Force India and Manor drivers – are well behind Hamilton in the number of elements used, up to their second components at most.

Hamilton admits he is frustrated to be the Mercedes driver closest to earning a penalty, given his quest for a fourth world championship.

“The worst thing is I’m the only Mercedes driver to have that,” he said. “For sure it’s difficult for us as a team and it’s difficult considering we are the Mercedes team, so if there’s 40 engines, you would hope that we have the best of the 40. That’s just the way it goes, I’ll just have to do the best I can with the one I have now and hopefully with the next one or two I get beyond that.

“It’s not easy when you look at the table and you see eight Mercedes drivers and everyone else is on a normal plan and on a second engine and still has four left and I have one left.”