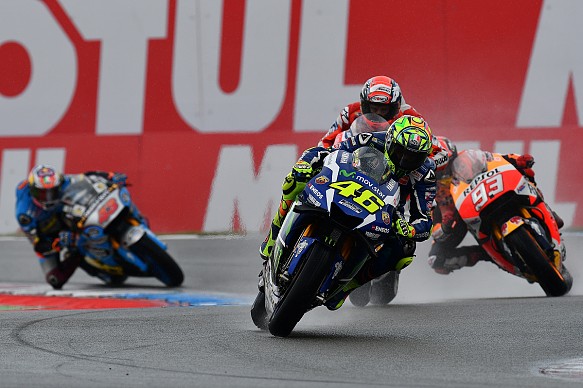 Valentino Rossi missed a golden opportunity to seize the MotoGP title fight momentum when he crashed out of the Dutch TT, and now faces a battle to make history.

Rossi headed to Assen having registered two DNFs from the first seven races, the same as Yamaha teammate Jorge Lorenzo, while championship leader Marc Marquez had scored points in every race.

Now, Rossi will have to become the first rider in the modern era to win a title having not scored in three races, assuming he does not add to that tally in the remaining 10 grands prix.

In the 17 seasons since then, five champions have failed to score points on two occasions, another eight just once and four had a perfect record.

Of Rossi’s two pre-Assen DNFs, one was a crash at Austin, the other an engine failure fighting for the lead at Mugello, but he said after winning at Barcelona that he felt more competitive than in 2015.

Lorenzo’s two non-scores are a fall at Termas de Rio Hondo, and then being taken out at Barcelona by Andrea Iannone, but when he was struggling and only set to score minor points.

Marquez crashed at Le Mans, but got back into the race to finish 13th and last and bank three points.

At the start of the wet Dutch TT, Marquez was 10 points clear of Lorenzo and 22 ahead of Rossi, but the Italian had their measure in the tricky conditions.

When Rossi fell on the third lap after the restart, he was leading Marquez, with Lorenzo languishing in 11th.

In a perfect world for Rossi, eventual winner Jack Miller still would have passed Marquez and split the pair, in which case Marquez would have 141 points and now be just 13 ahead of Rossi.

Lorenzo, aided by falls such as Rossi’s ahead, eventually salvaged 10th and sixth points.

“This one is a problem for the championship, especially if you add the zero in Mugello for the engine,” Rossi said post-race. “It’s not finished until it’s finished, and now we have just to try the best at every racetrack, try to be competitive every weekend.

“The championship is long.”

Rossi narrowly missed out on the 2006 title, having recorded three DNFs, finishing just five points behind Nicky Hayden. After his third failure to finish at Laguna Seca, he was fourth in the standings, 51 points behind with six races to go.

But he rallied as Hayden faltered and actually took the lead at the penultimate race, Estoril, where he finished second to Toni Elias by 0.002s – Rossi would have been champion with a reversed result.

Then, in the Valencia finale, Rossi fell and could only manage 13th, with third enough for Hayden (pictured below) to finish the year on top. 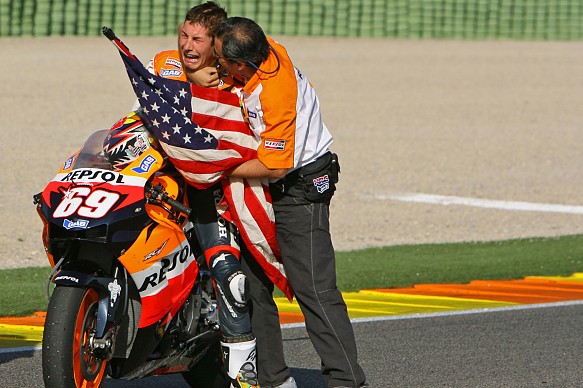