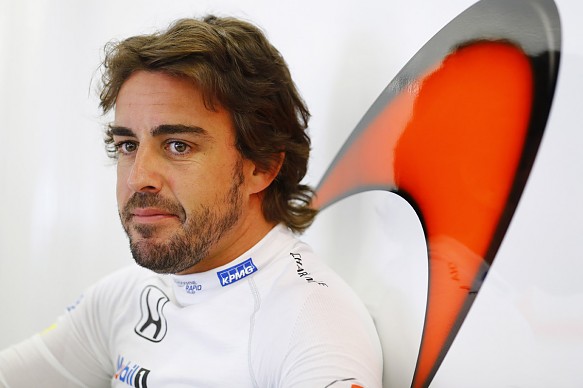 Fernando Alonso insists he is doing all he can to drive Honda on to continue to improve in Formula 1 bar “punching them.”

Following McLaren collecting points in three consecutive races from Russia, Spain and Monaco, the team has fallen shy in the last two in Canada and Azerbaijan, with Alonso retiring last time out in Baku with a gearbox failure.

Suggested to Alonso that Ayrton Senna was someone who pushed McLaren and Honda hard in the past, and whether he was able to push the Japanese manufacturer as hard as he wanted, he replied: “Have you been to the briefings?

“Apart from punching them I cannot do anything more. I am trying to push everyone. I am aware of their hard work, that they are doing their best, working 24 hours [a day] in Sakura. They are bringing all the knowledge from the outside as well, from all of the manufacturers. Unfortunately in Formula 1 there is not a magic button you can touch, that from one day to another you can reach a certain level.”

Alonso can at least see the significant difference between McLaren-Honda now, in comparison to last year’s Austrian Grand Prix, when he and Jenson Button took a combined grid penalty of 105 places due to engine problems.

“We are definitely moving forward in the right direction,” said Alonso. “Last year the project was not mature enough, especially because the power unit was not ready. I remember here we had 105-place penalties between Jenson and me, so this was definitely a sign we were not ready to compete.

“We are a little bit behind compared to the other manufacturers, but in terms of the organization, on the chassis side, we are comparable to the top teams. We are in a situation much better than last year, which makes us more confident about next year.”

Alonso is convinced Honda’s progress from last year to this outstrips that of Mercedes in the first two years of the current engine regulations.

“The biggest problem was the starting point because we were too far behind last year.”