ANSA Motorsports’ Brett Sandberg, driving the No. 13 Reiter Engineering KTM X-Bow GT4, had a very positive racing weekend in Elkhart Lake, Wisconsin. After scoring his second win of the season on Sunday afternoon, Sandberg has taken over the lead in the 2016 Pirelli World Challenge GTS driver championship, with seven races to go.

In Race 1 of 2, the No. 13 ANSA Reiter Engineering KTM X-Bow was competitive, but Sandberg, who qualified second for the race, found out quickly that he had some suspension issues. He stayed on track for a while, despite the high pace, trying to save the day and score points, but was forced to pit for repair. ANSA Motorsports’ mechanics diagnosed the problem quickly and did a very fast job changing the upper suspension arm, so Sandberg was able to finish and score precious points.

Meanwhile, an unexpected racing scenario was happening on the track. Sandberg’s direct opponent for the 2016 Pirelli World Challenge GTS driver championship, Lawson Aschenbach, had an even worse misfortune, forcing him to spend more than half of the race length in the pits and preventing him from scoring championship points. Despite finishing 16th in Race 1, Sandberg was able to recapture the GTS driver championship lead by one point.

In Race 2, Sandberg who had the fastest race time in Saturday’s race, started on the pole. He had a brilliant standing start and a perfect race that was the result of an awesome drive.

“It was an eventful weekend for us,” Sandberg said. “I was really excited to be on the pole for Race 2. We made some changes with the KTM X-Bow’s setup, as we thought conditions would be different with the IndyCar rubber. And it paid off. The ANSA Motorsports crew has worked extremely hard to get the car where it is right now. That is exciting for the entire team. I think the GTS series is going to continue to grow. It’s a testament to the series and the balance of all of the cars involved. It’s tough to balance all of the different cars. It showed on Saturday. I don’t think I’ve seen a battle that close with that many different makes this year. The GTS series is only getting better and better.”

Sandberg’s victory is his second of the season, and with a total of six podium finishes and six pole positions, that makes him one of the most successful GTS drivers this season.

Sandberg’s teammate, Bill Ziegler, did not have the same luck at the Pirelli World Challenge Grand Prix of Road America presented by Cadillac. In the final laps of Races 1 of 2, Ziegler crashed. He was OK, but his car could not be repaired in time for Race 2. But because ANSA Motorsports carried a third KTM X-Bow in its trailer, he was able to complete Race 2 in the spare ANSA KTM X-Bow. Ziegler, driving the No. 9 Swisher Racing KTM, finished 12th in Race 2. 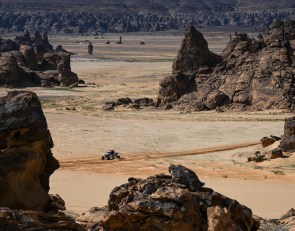