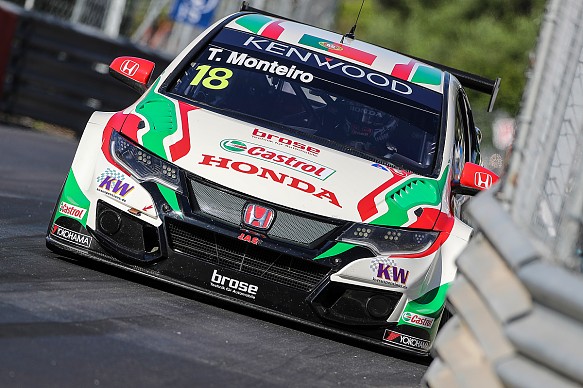 Monteiro secured pole for the main race in Saturday’s qualifying session and led from lights-to-flag in his factory Honda Civic to clinch his ninth WTCC win, despite issuing fears about his engine.

After converting pole into a first lap lead, Monteiro struggled to shake off the Citroen of Muller, who had held his second away from the grid, ahead of Norbert Michelisz and Rob Huff in the second and third Civics.

Monteiro soon stabilized his lead, but gave the home crowd a fright when he reported that his engine had cut at the end of lap five. Those fears were gradually allayed as Monteiro continued to reel off laps at the front, with the Portuguese eventually winning by 0.821 seconds from Muller.

Michelisz completed the podium despite getting a hurry-up nudge from team-mate Huff, who settled for fourth.

Jose Maria Lopez struggled to keep pace with the leading quartet and, despite catching the pack up midway through the race, eventually dropped 12s back from Huff in a subdued fifth in the second factory Citroen, just a second clear of Polestar’s Thed Bjork.