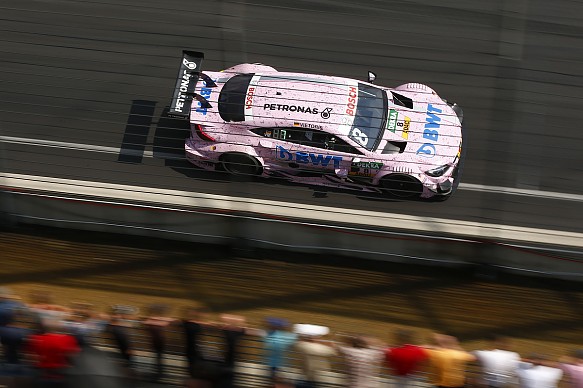 Mercedes Team Mucke driver Christian Vietoris will start the first DTM race at the Norisring from pole position after setting the pace in qualifying.

In a frantic and tightly contested 20-minute session, with two tenths separating the top eight drivers, Vietoris put in a lap of 48.144s around the halfway mark which proved to be unbeatable.

Audi Abt Sportsline driver Mattias Ekstrom will join Vietoris on the front row, ahead of fellow RS5 driver Jamie Green.

Practice two pacesetter Robert Wickens was fourth-fastest, ahead of the lead BMW of Bruno Spengler.

Edoardo Mortara, who was quickest in opening practice, will line up in sixth.

Mike Rockenfeller and Nico Muller will complete the top 10 on the grid.

BMW struggled in comparison to rivals Mercedes and Audi at the German street track, with Timo Glock, Augusto Farfus, Marco Wittmann and Maxime Martin the marque’s leading drivers in 11th to 14th.