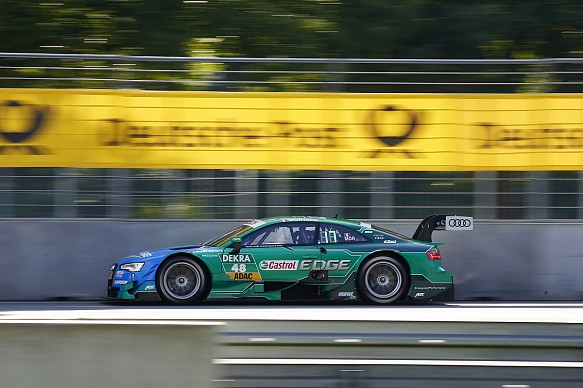 Audi Abt Sportsline driver Edoardo Mortara became the first multiple race winner of the 2016 DTM season after beating Jamie Green to victory in race one at the Norisring.

The Italian started in sixth place and moved up to fourth early on, before inheriting the lead just before the halfway mark as leaders Christian Vietoris, Robert Wickens and Mattias Ekstrom collided at Turn 2.

Audi driver Ekstrom had been looking to pass Wickens into the hairpin but the pair touched wheels after braking too late for the hairpin, spinning Vietoris in the process.

Both Ekstrom and Wickens, who led the championship coming into the weekend, retired while Vietoris continued.

The safety car was deployed as a result, with Mortara leading the field on the restart and holding off the advances of fellow Audi driver Green to claim his second victory of the season.

The result also shatters Mercedes’ run of 13 consecutive wins at the Norisring, with HWA’s Paul di Resta the top C63 driver in third.

Maximilian Gotz enjoyed a feisty battle with Augusto Farfus during the race, taking the chequered flag in eighth to score his first points of the season, while Antonio Felix da Costa recovered from 21st on the grid to finish ninth.

Polesitter Vietoris dropped to 10th at the flag, with Farfus, Martin Tomczyk, Lucas Auer and Timo Glock next up.