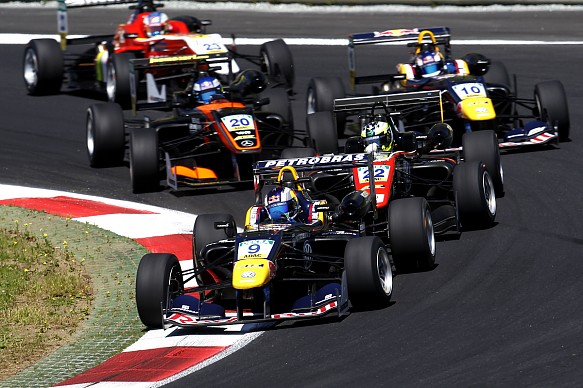 Increased aerodynamic restrictions and an extension to the life of the current engines have been voted into force for Formula 3 by the FIA World Motor Sport Council.

Improved safety measures have also been announced for F3 by the WMSC in the wake of its Turin meeting on Friday. The moves come after meetings between the FIA and team managers in the F3 European Championship, beginning with a four-hour rendezvous at the Pau round last month.

With grids plummeting this season, the governing body and the teams attempted to find ways of marrying two targets: lowering costs and increasing performance.

The aero development restrictions will be introduced to the technical regulations for the 2017 European championship “in order to re-establish the performance equity between large, small, experienced and new teams, as well as reducing the management cost and development budgets.” This comes in the wake of some being deterred from competing in F3 because of the wealthy investors behind Prema Powerteam, Hitech GP and Van Amersfoort Racing.

Homologation of the current engines, which came into force in the Japanese championship in 2013 and the European in ’14, has now been extended for two more years until the end of ’19, to bring them into line with the lifespan of the current chassis, again with the aim of saving costs.

The safety measures are along the lines of those being discussed by the teams even before the huge shunt suffered by Peter Li and Ryan Tveter at the Red Bull Ring. A new front-impact structure, additional Zylon panels and new wheel tethers have been approved.