The second day of SCCA U.S. Majors Tour competition at the Mid-Ohio Sports Car Course in Lexington, Ohio, was simply fantastic. Appetites have surely been whetted for both race fans and drivers for the upcoming SCCA National Championship Runoffs, presented by Garmin VIRB, which will be held at Mid-Ohio in September.

The first race Group of the day featured nearly 50 Spec Racer Ford and Spec Racer Ford Gen3 cars. With rain overnight and early in the morning, the track’s dampness had drivers wondering if slick or wet tires would be best. Scott Goolsbey opted for wets after taking advantage of the short morning warm-up, and the wets did him well as Goolsbey went on to win SRF3 by an unheard-of 28 seconds. 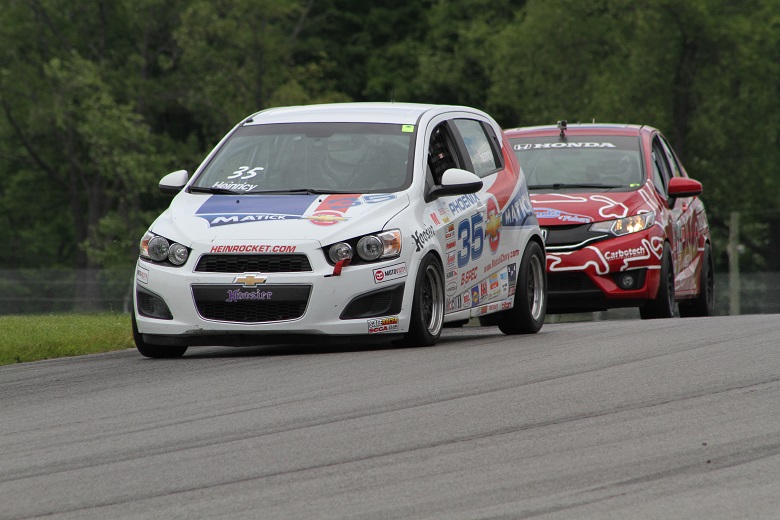 “We made the right call on the tires while a few other drivers were pretty brave and went out on slicks. I just didn’t think that even if it became dry you’d be able to get heat into the slicks,” Goolsbey said. “I was going to do the Runoffs this year, but my wife is due with our first child in October, so I won’t be coming to the Championships. But for the guys that will be racing at the Runoffs, use rain tires unless it’s dry. That’s my suggestion.”
The B-Spec Class thrilled spectators both Saturday and Sunday. On the first day of the weekend, Honda Fit drivers David Daughtery and Chi Ho swapped the lead multiple times with John Heinricy in a Chevrolet Sonic. At the end, it was Heinricy that claimed the win. Then on Sunday, Daughtery and Heinricy picked right up where they left off 24 hours earlier. Leading for most of the race, Daughtery was able to hold off Heinricy. But at the race’s very end, Heinricy again emerged at the front.
“This was some of the most fun I’ve had in B-Spec in a long time,” Heinricy said. “There was a lot of racing going on, and I think the key to winning was managing the fast cars coming through traffic.”
In Sunday’s Group 8 race, drivers at the front in both F Production and H Production also battled for supremacy throughout the event. Kevin Ruck with his Acura Integra won in FP, but it didn’t come easy.
“I got a good start and headed off with the lead, but then I dropped off the track and went in the grass,” an exhausted Ruck said after the race. “The top three guys went by and I just set off after them. Then I got up to second and it started raining. I half-spun the car, but got it back in gear and set off again. Kept on chugging away and caught the leader with about three laps to go and made the pass. It was an unbelievable win.”
The final race Group of the day also contained a thriller in the Formula Mazda Class. Jarret Voorhies maintained control for most of the race, but it was Matt Machiko who squeaked by at the last moment to snatch a win.
“The track was just perfect for us today after a rainy Saturday,” Machiko said. “Jarret really made me work for this. I made a last-lap pass at the end of the straightaway after being patient. I just figured it was time to jump on it then.”
With the Mid-Ohio SCCA U.S. Majors Tour complete, next up for the Northeast Conference is the June 24-26 SCCA U.S. Majors Tour at Watkins Glen International. The Northern Conference continues its calendar June 17-19 at the SCCA U.S. Majors Tour June Sprints at Road America. More information about the entire SCCA U.S. Majors Tour can be found at SCCA.com/majors.
Below are provisional race results from Sunday’s SCCA U.S. Majors Tour at Mid-Ohio with Class: Name, Hometown and Car.
-American Sedan: Philip Smith; New Albany, OH; Chevrolet Camaro
-B-Spec: John Heinricy; Clarkston, MI; Chevrolet Sonic
-E Production: Breton Williams; Clinton, IA; Mazda MX5
-F Production: Kevin Ruck; Atascosa, TX; Acura Integra
-H Production: Tom Feller; Clarkston, MI; Triumph Spitfire
-Formula 1000: Alex Mayer; Harleysville, PA; JDR
-Formula 500: Steven Thompson; Royal Oak, MI; T&R Fabricating TR1
-Formula Atlantic: Kerry Jacobsen; DeLand, FL; Swift 016
-Formula Continental: Joshua Saurino; Tulsa, OK; Van Diemen
-Formula Enterprise: Scott Rettich; Columbus, OH; Formula Enterprise
-Formula F: Andy Brumbaugh; Elgin, SC; RF-98
-Formula Mazda: Matt Machiko; Wexford, PA; Formula Mazda
-Formula Vee: Andrew Whitston; Neenah, WI; Protoform P2
-GT-1: David Pintaric; Canfield, OH; Chevrolet Corvette
-GT-2: Andrew Aquilante; Chester Springs, PA; Chevrolet Corvette
-GT-3: Phil Lasco; N. Venice, FL; Mazda RX 7
-GT-Lite: Michael Kamalian; Marietta, GA; Mazda Miata
-Prototype 1: Tim Day Jr.; Scottsdale, AZ; Stohr WF-1
-Prototype 2: David Ferguson; Paso Robles, CA; Mazda VanDiemenRFS-03
-Spec Miata: Justin Hille; Canfield, OH; Spec Miata
-Spec Racer Ford 3: Scott Goolsbey; Prior Lake, MN; Spec Racer Ford Gen3
-Spec Racer Ford: Mike Miserendino; Bakersfield, CA; Spec Racer Ford
-Super Touring Lite: Jeromey Mizer; Millersburg, OH; Honda Civic
-Super Touring Under: Joe Moser; Wilmette, IL; Honda Prelude
-Touring 1: John M Buttermore; South Lyon, MI; Chevrolet Corvette
-Touring 2: Kurt Rezzetano; Phoenixville, PA; Ford Mustang GT
-Touring 3: Chad Gilsinger; Marysville, OH; Acura TL SH-AWD
-Touring 4: Ryan Kowalewski; Indianapolis, IN; Mazda MX-5-American Sedan:
Photo: John Heinricy leads David Daughtery on the way to a B-Spec win at the Mid-Ohio SCCA U.S. Major Tour on Sunday
Photo Credit: Shaun Lumley