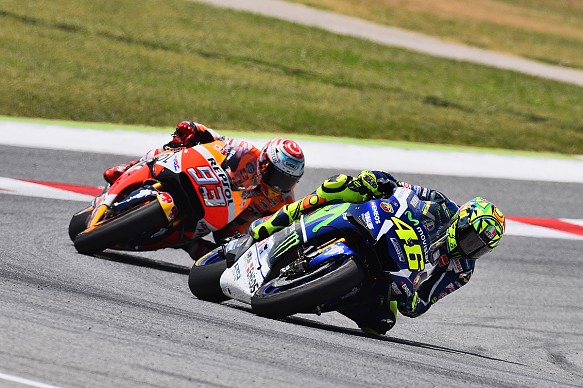 Valentino Rossi says his feud with Marc Marquez is over after the events of the Barcelona MotoGP weekend.

The pair had been at loggerheads since their collision at Sepang last year and Rossi’s accusations that Marquez had been trying to help Jorge Lorenzo beat him to the 2015 title.

But after winning their fight for Catalunya Grand Prix victory on Sunday, Rossi sought out Marquez and shook his hand.

He said the death of Moto2 rider Luis Salom in a practice crash on Friday had convinced him it was time to repair relationships.

“When these things happen, all the rest becomes not very important and very small. I think it’s the right thing to do,” Rossi said. “We need to stay quiet and stay relaxed because it is a great sport, it is our passion, but it is also dangerous.

“So a normal behavior and normal feeling with the other riders is also helpful for staying more quiet and more concentrated.”

Asked directly if he now felt his relationship with Marquez was better, Rossi replied “yes” and the Spaniard responded by placing his hand on his rival’s shoulder. But Rossi admitted there were still issues between him and Yamaha teammate Lorenzo.

“The situation with Lorenzo is a little bit different,” he said. “At the beginning of the season, I didn’t think ‘I won’t have any more relationship with him’ or not speak with him and not say ciao. But from when I came back to Yamaha I was always me and going to Jorge to say ‘ciao Jorge, how are you feeling?’

“This year I waited for him to come, but it never happened so you have to speak with him.”

RACE A TRIBUTE TO SALOM

Salom’s family agreed for the rest of the event to go ahead after his death, and Rossi said the lead battle was the best tribute the MotoGP field could give to him.

“It’s the best way to remember Salom and a small gift and homage for his family,” he said. “It’s not very important but it’s what the other riders can do.

“A race weekend is always very exciting but very difficult. When Friday happened it all became a lot, lot more difficult to come back on track and find the right concentration. It’s very sad.”