Formula E is delaying the move to open battery competition until season five, with Williams set to continue producing a spec battery for the championship.

The original FE roadmap aimed to introduce open battery competition for the 2016-’17 campaign but this has proven to be too ambitious. Series CEO Alejandro Agag told Autosport: “For years three and four it’s going to be a new battery, but the same for everyone. [It will be a] new design from Williams, in principle. It’s not signed but it’s really looking like we’re going in that direction.”

Williams Advanced Engineering has already started work on the season three battery but will not finalise its design until the technical and sporting regulations are set. 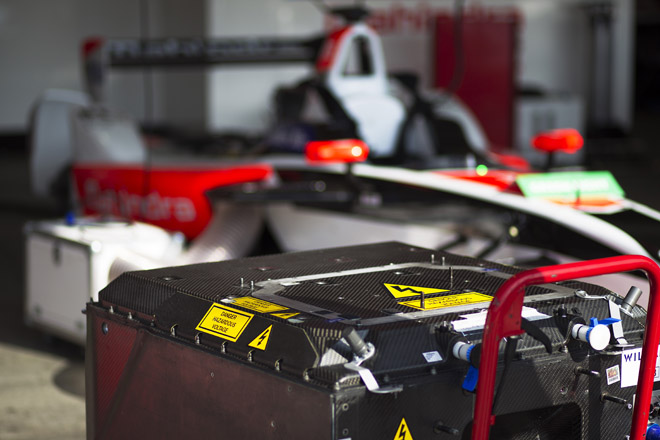 “We are looking at a season three battery,” confirmed program leader Gary Ekerold. “We feel we’d be capable of meeting the needs. Naturally, our experience of the last year and a half will help us build a better quality product.”

It is unknown whether the plan to increase the battery’s capabilities to 32kWh of energy and 250kW of peak power for season three will also be altered.

The batteries currently provide 28kWh of energy and a maximum power output of 200kW, generated by a maximum 200kg of lithium-ion cells. Ekerold says increasing power output is possible but the chemistry technology does not exist to double that energy supply within the current cell weight limit.

“Energy is probably more challenging than anything else because of the limited packaging space,” he added. “The cell technology is developing, without question, so we would like to think by season three or four there’s a slightly improvement but you’re not going to get a massive step change between two and three.

“Unfortunately, the chassis is static until season five. So in terms of packaging space, it’s still the same. You could argue we could design a new battery box, but it would require crash testing, passing UN regulations, all these extra things that fundamentally don’t lead to a better battery.

“Power increase is a possibility but we’ve got to find a balance between reliability and technology.”

When Ekerold refers to “the limited packaging space” he is referring to how Williams came into the Formula E project late and had to design the current battery within tight parameters.

Because the Dallara-built chassis will remain in the series for a few more years, that means very limited scope for Williams to alter the fundamental design of the battery, however much its capabilities have to change to suit the championship’s roadmap. Formula E is keeping that roadmap flexible, which is crucial as it edges ever closer to getting rid of car swaps, as envisaged, for season five.

Whether it’s with a more powerful battery or the introduction of wireless charging, the championship will require a solution that does not limit the on-track performance of its cars.