MotoGP could “double” its crowds in America if it can generate more opportunities for riders from the United States, says 1993 500cc world champion Kevin Schwantz.

Aspar’s Nicky Hayden will be the only American rider in three grand prix classes at this weekend’s Circuit of The Americas round. From 1978 to 1993, US riders won all bar three of the premier 500cc class titles, with championships shared between Kenny Roberts, Freddie Spencer, Eddie Lawson, Wayne Rainey and Schwantz.

Hayden’s 2006 crown makes him the most recent American champion, with Ben Spies’ 2011 Dutch TT win the last MotoGP victory for a U.S. rider. Spies’ second in that year’s finale was the last American podium.

“The diehard enthusiast is still going to come, but if we had two or three kids in Moto3 or Moto2 and maybe Nicky on a factory bike closer to the front, I think you could double the crowd pretty easily,” Schwantz, who is a consultant for the Austin track, told AUTOSPORT. “It used to be not ‘is an American going to win?’ but ‘which American is going to win?’ back when I raced. Now it’s like ‘golly…’

“Us American fans like to go hear Star Spangled Banner play. We want to hear our national anthem not the Italian or the Spanish or the Australian.”

Schwantz moved from the U.S. to the world championship with Suzuki support in the 1980s, and sees the decline of the U.S. scene as the root cause of America’s MotoGP downturn.

“I know we still have as many talented kids as we had when Rainey and Roberts and Lawson, and all of us raced. But there’s not that pipeline when you’ve just got one manufacturer involved,” he said.

“It’s so hard for a kid, even if he’s really good, to be able to make that transition onto racing in the world championships when as a family you’ve got to fund yourself to go over and do that. And the prices they’re asking to do Moto2 in that Spanish championship that bleeds into Moto2 are astronomical.”

The Rainey-led KRAVE Group is currently re-establishing what was AMA Superbikes as MotoAmerica, in a project that Schwantz said has “got to be better than what we had.” But he added that young American riders also need to take full advantage of opportunities, after 2013 AMA champion Josh Herrin’s unsuccessful Moto2 effort with Caterham last year.

“Josh didn’t ever really seem to have his heart and soul into it,” said Schwantz. “When somebody throws you an opportunity like that, you pack up a suitcase and you go and do what you’ve got to do.

“Your friends and your family and your pets stay home, and off you go. It’s a once-in-a-lifetime opportunity.” 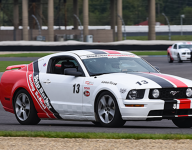