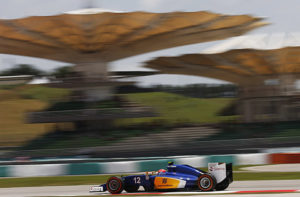 Felipe Nasr says his “troubled” Malaysian Grand Prix was a “big lesson” for him and the Sauber Formula 1 team, following a star performance in Australia.

The Brazilian rookie finished fifth on his F1 race debut in Melbourne, but he struggled to 12th at Sepang last time out. Nasr explained that a raft of problems throughout his Malaysian GP weekend prevented him threatening the scorers for a second consecutive race.

Having skipped the first practice session to allow Ferrari junior Raffaele Marciello to drive, Nasr said a problem with a-symmetric brakes that locked continually meant he “wasted” his first session in the car in FP2. He revealed that a locked differential, caused by a software problem, spoiled FP3, before a fuel-flow sensor failure caused a loss of power in his Ferrari engine in qualifying.

Having started a lowly 16th, Nasr could only recover to 12th after damaging his front wing against Kimi Raikkonen’s Ferrari early on in the race.

“Malaysia was a troubled weekend for me from the very beginning,” Nasr said. “It was a big lesson for everyone – from my side, from the team’s side. Even with all this trouble and numerous problems we had, looking back, the 12th place was not that bad. Of course it’s not what we want, but it’s only the second race of the season, so there is still a lot to go.”

Nasr was forced to make four pit stops in Malaysia, after struggling to manage his tires effectively, but he hopes a revised suspension setup and a new front wing on the C34 will boost him back into points contention in China.

“We will start fresh again, and it will be the first time I will have the three [practice] sessions available to me to work on the setup of the car and understand the track. I’m looking forward to this one.”