Ward pulls out of FIA election

Ward pulls out of FIA election 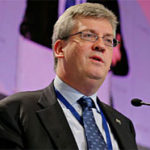 David Ward has pulled out of the election for FIA presidency after failing to secure enough support to be nominated.

Ward, an FIA Foundation director, had announced in August that he would stand against Jean Todt in this year’s election. The Briton had been vocal in his criticism of the election process and claimed he would withdraw if Todt or another rival would take on his reform agenda.

However, on Thursday Ward announced he had failed to secure the required number of regional vice presidents to support him to ensure eligibility. The news means Todt is likely to go into the election uncontested.

Ward congratulated Todt, but insisted the system needed to change.

“For many years the FIA has struggled with governance reform,” said Ward. “All too often it takes one step forward and then two steps back. This is clear from the current election which is being run on a shorter presidential list than 2009 but which is offset by a new requirement for 26 nominating clubs.

“The 2009 eligibility threshold was 23 but has now risen to 37 which is the highest ever in the history of the FIA. The need to obtain seven Vice Presidents for Sport has given control over whether or not there can be a contested election at all to the FIA’s sport regions. Moreover the use of support agreements in advance of the election makes it very hard for any candidate to obtain the required Vice Presidents for their list.

“In the FIA’s North American region, 11 out of the 12 clubs signed an agreement to support Jean Todt in March. This left only one club available to provide a Vice President for my list. Clubs from the region that are sympathetic to my candidacy would have to break their previous pledge of support. It is understandable that they have been reluctant to do so.”

Despite the failure of his election campaign, Ward insisted that he was pleased with the impact he was able to have.

“My candidacy in the 2013 election has not been motivated by a burning ambition to serve as President of the FIA,” he added. “My clear preference would be for a club president to be elected to that role, supported by the appointment of a new chief executive. That is why I have described myself as a reluctant candidate.

“What I have tried to do is to encourage debate about the flaws that exist in the FIA’s governance system. I am satisfied that I have succeeded in that.”