Dixon calls for Barfield to be fired

Dixon calls for Barfield to be fired

Scott Dixon has called for the replacement of IndyCar race director Beaux Barfield, while simultaneously firing a broadside against the series’ judicial system as a whole and rejecting Will Power’s apology for their Baltimore collision.

The Target Chip Ganassi Racing driver has been on the receiving end of two controversial incidents involving Penske’s Will Power in as many weekends. He was issued a drive-through at Sonoma for clipping a tire being carried by a member of Power’s crew in the pits, which Dixon believed was the result of Penske deliberately trying to obstruct his path. He and Power were duelling for the lead at the time.

At Baltimore, he was unhappy when IndyCar rejected Ganassi’s request for his car to be returned to the pits for repairs after he and Power came together on the track, despite the race being within the window where recovery and return of damaged cars would normally be permitted.

Dixon says IndyCar’s judicial system is in disarray. “There’s just no consistency,” he said. “The No. 15 [Graham Rahal] turns us, the No.4 [Oriol Servia] does the same on the next restart and gets a penalty; the No. 12 car [Power] ran over a hose in a pit stop and gets no penalty. There were just so many [bad] calls.” 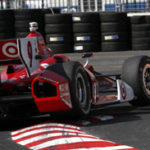 IndyCar said a belief that Dixon’s car was too badly damaged to be repaired, coupled with a desire to return the race to green conditions following a long spell under yellows, prompted its decision not to retrieve his car.

Dixon rejected that assessment, saying: “What I was so p***ed off about was that it was just a bent toe rod and an upper A-arm. We take extra time to make sure we have pre-set A-arms ready to bolt straight on to the car it is maybe three or four minutes to change.

“For them not to bring the car back, which it clearly states in the rulebook…if there are 10 laps to go then maybe that’s fair, because there’s not much distance to go. [But] at that point there were 27 laps to go, so to not have it there to repair is beyond me.

“We had that same situation with Beaux at Long Beach two years ago where he left me in the run-off for the whole race. We had an engine thing that could have been fixed in no time and he never let us get back out there. It’s quite obvious that Beaux can’t do his job. He’s not capable of it and needs to go.”

Dixon was also in no mood to forgive Power, who took responsibility for the accident.

“At that speed, in fourth gear, there’s no chance of the car stepping out,” Dixon said. “Whether he knew we were there or not, its just stupidity, really.

“It was funny on the radio we were scanning [Penske], and [team president Tim] Cindric was telling him exactly what he needs to say when he gets out of the car.”