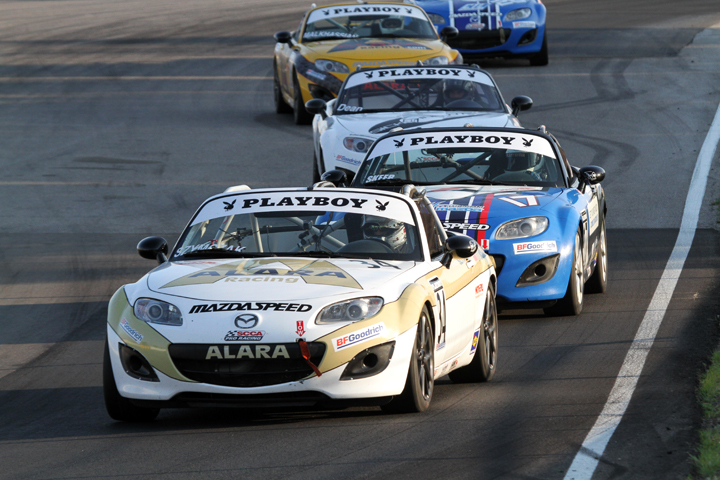 In a race that featured some very close running near the front, Szymczak was able to hold down the top position for 27 of 28 laps around the 10-turn, 2.459-mile road course. Starting on the pole in the No. 34 ALARA Racing MX-5, Szymczak held the lead of the race, which averaged 91.357 mph, until he was passed by Skeer on lap two. Szymczak retook the lead on lap three, and never looked back, scoring his first CTMP win.

“It was a tight race the whole way through,” Szymczak said. “The draft really came into play and everyone was able to run in a pack. It was very hectic. I found myself looking behind, trying to pay attention to where the guys were behind me. There was never a dull moment. I’m happy to get away with the win and keep the car clean.

“We were able to get a good feel for the car and what it will do throughout the race distance. We also got to see what everyone else is capable of. Those two things set our minds at ease going into tomorrow, because we have  an idea of what to expect.”

Starting from the third position, Dean spent most of the race embroiled in a tight battle for third. On lap 24, while fighting for second, Skeer and Ara Malkhassian pushed wide going through Turn Eight, opening the door for Dean. Driving the No. 16 Projections Research/Sick Sideways MX-5, Dean took advantage of the opening, holding onto second position for the final four laps.

“On this track it is very difficult to pass,” Dean said. “The best thing to do was to fan out a little bit and try to pass that way. There was a bit of contact, and Ara ended up pushing Skeer wide in Turn Eight, which allowed me to make the pass.

“As the laps wound down, I was pushing hard, because I could see Skeer back there. We go into race two with a car that’s in once piece, with not much work to do, so that’s a blessing.”

In the No. 17 Pelican Replacement Windowns.com/ZoomZoomNation.com/Alpinestars MX-5, Skeer filled Szymczak’s mirrors for the first half of the race, staying within 0.2 second of the leader. On lap 19, Malkhassian got a run on Skeer, and made the pass for second stick. Five laps later, after going side-by-side with Malkhassian in Turn Eight, which allowed Dean past both drivers, Skeer slotted into fourth. He was ultimately able to get back around Malkhassian to complete the podium.

“We were looking pretty good off the start,” Skeer said. “For the first eight laps of the race we were solid, waiting for something to happen or make something happen, later on. That was the plan from the start, to conserve the tires.
“Things got interesting when Ara got up toward the front. At that point, you have to start to battle or you’re going to drop back to fifth or sixth. It’s frustrating when you’re trying to fight to stay on the podium and you see the new point leader inching away. That was probably the hardest part. But, I know that the car is good. Come tomorrow, it could just be like any other race weekend this year with Christian winning on Saturday and me winning on Sunday. Hopefully, this will be another one of those weekends.”
Following spirited battles with nearly every driver in the top five, Malkhassian brought the No. 11 ALARA Garage/ALARA Racing MX-5 home in fourth, setting a new race lap record of 1:36.193 (92.027mph).
Patrick Gallagher completed the top-five, but was in the hunt for most of the race, keeping the leaders within striking distance. In the No. 28 MAZDASPEED/Howard Concrete Pumping/CTL Engineering MX-5, Gallagher spent most of the race within 1.5 seconds of the leader, until the waning laps.
In the Skip Barber MAZDASPEED Pro Challenge, Kenton Koch racked up another victory in 2013, keeping his win shutout streak alive. Driving the No. 63 Skip Barber Racing School SBMX-5, Koch was in second by the end of lap one, battling an ill-handling car, until Lucas Bize was forced to drop out on lap 17 with a driveline issue. Koch went on to the win.
“We definitely had some tough competition out there,” Koch said. “My car was so loose. I didn’t take into consideration the track conditions we would be running in, later in the evening. I felt like I was on ice the entire time, trying to keep from wrecking the car. The traffic was also a challenge. If it had just been me and Lucas [Bize] out there, it would have been a lot more fun dicing with each other.
“Lucas was driving a tough race out there. Even if my car were handling well, I’m sure he would have given me a real run for my money. This win was a lot harder, but we’ll see how tomorrow goes. We’re going to make some changes and work to get a gap from the Mazda MX-5 Cup cars to race with Lucas.”
Robby Foley and David Knight (No. 97 Jacuzzi SBMX-5) completed the podium in second and third, respectively. While Koch took the win, Bize took the track record, with a fast lap of 1:37.715 (90.594mph).

The standing start for Round Eight of the Playboy Mazda MX-5 Cup is scheduled for Sunday at 5:15 p.m. (EDT), capping off two days of racing action at CTMP.