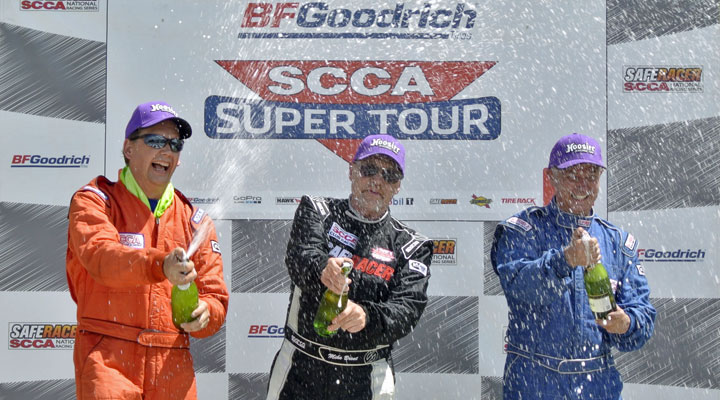 On the last weekend to score points in the SCCA Eastern Conference Majors Tour, no one was going to relax on Saturday at Watkins Glen International. As a result, all of the wins were earned, not given, during the BFGoodrich Tires Watkins Glen Super Tour event.

Rick Kavitski, of Freeland, Pa., pulled his No. 24 RDK Engineering Mazda Miata away from the field from pole position and drove to a 7.258-second win in E Production in the day’s opening group.

The battle raged behind him in F Production in the early stages between two former National Champions and a recent podium finisher. Charlie Campbell’s No. 89 Campbell Brothers Racing/Jesse Prather Motorsports Mazda Miata took the lead on the opening lap, but 2010 champ and polesitter Kevin Ruck moved back into the lead on lap three. Campbell and 2009 champion Mark Carpenter, making a recent return to racing after a two year sabbatical, chased the No. 3 Hoosier/Honda/Cobalt Acura Integra while simultaneously battling for the runner-up.
Ruck opened up a gap while Carpenter’s No. 0 GSS Technical Publications Acura Integra moved into second on lap seven. With a lap and a half to go, Carpenter’s car slowed and pulled off course, elevating Campbell to second.
That mechanical failure would prove especially costly, as Ruck slowed coming onto the front straight to take the checkered flag with a flat front tire. Trying to will his car to the finish line, Campbell whipped past at speed within 20 feet of the stripe, taking the win by just 0.088 second.
GT-1 appeared poised to be a battle, as both Amy Ruman and Dillon Machavern were flirting with the existing class track record in qualifying. Ruman led away from the pole in the No. 23 McNichols Co./Cenwald/Goodyear Chevrolet Corvette, and then went to work edging away from Machavern’s No. 29 Heritage Automotive Group/Riggins Engineering Ford Falcon.
Ruman opened up a lead of five seconds by lap 11, when the full course caution flew for a single car incident. The race ended under yellow, saving Ruman from battling off a final charge.
When overall polesitter CJ McAbee’s No. 15 AJ’s Import Garage/Hoosier AJ’s 2012/Rotax pulled to pit lane with mechanical issues on lap six, it left both Joe Parsons and Michael Brent to cruise to Formula F and Formula 500 wins, respectively. Not even a full course caution on lap eight could challenge the runs, as Parsons’ No. 37 Investment Advisors Asset Management Swift DB-6 gapped the field once again on the lap 11 restart. Brent cleared the Formula 500 field in his No. 47 Hoosier Tire/QRE Invader QC-1/Rotax to win that class.
Elivan Goulart and Matthew Ferris pulled away from the Spec Miata field, with Goulart’s No. 70 SAC Racing/SCDA1.com Mazda Miata setting the pace. Ferris ran nearly identical lap times in his No. 06 SAC Racing Miata, but couldn’t find his way around Goulart prior to the completion of the 14-lap race.
Mike Collins had the Touring 4 race wrapped up until the wheels fell off of his No. 75 Meathead Racing Mazda MX-5 literally. Coming to the checkered flag, Collins lost a wheel and, naturally, slowed dramatically. His big lead evaporated as Jared Lendrum’s No. 71 North Country Subaru Subaru BRZ flew past to take the win; Collins skidded across for second.
Jonathan Stocum, of nearby Horseheads, N.Y., won B-Spec in the No. 4 Simmons-Rockwell Ford Fiesta.
The “wings and things” group was chaos from the green flag to the checkers. As the green flag flew, the D Sports Racing duo of Keegan Van Sicklen and Dennis Hanratty touched, spinning Hanratty out on the front straight and causing Van Sicklen to slow and pull off on the opening lap. Just past the start line, in turn one, the C Sports Racing machine of Jacek Mucha, the Formula Atlantic of Bruce Crockett, and the Formula Continental of Kyle Mack came together in a heap of metal. All but Mack were able to resume once untangled by the safety team.
The field went green again on lap four, but Connor Burke’s Atlantic brought out a caution again on lap five when he pulled to a stop on the front straight with a flat tire and brake rotors spread down the front straight.
Jimmy Simpson drove his No. 36 Hoosier Tire/K-Hill Swift 016/Mazda to the overall and Formula Atlantic lead shortly after the lap eight restart, and then pulled off course during lap 12 as did then D Sports Racing leader Greg Bell’s No. 33 The Door Company/Young Racing Stohr WF-1/Suzuki.
The cars off track, along with debris from the earlier incidents, caused the race to be shortened to 13 laps. Paul Schneider, with a win in Formula Enterprises behind the wheel of the No. 73 Performance MotorCars of Charlotte/Syvel Images/Dangerous Cargo machine, clinched his class title with a fist pump as he crossed the stripe.
The Spec Racer Ford battle ended with class championship leader Cliff White’s No. 58 Thompson White Racing SRF battling Brian Schofield’s No. 61 PM Racing SRF in a match race for the win. Schofield crossed the stripe in front with two to go, but White had the inside line in Turn 1 and took the lead. White held it for the final two laps, taking a firm hold in the Championship battle.
Both White and Tray Ayres, who finished fourth in the No. 7 Ayres Racing SRF, have raced more than the eight point-counting races and are dropping their worst finishes. White clinches with a second or better on Sunday, or if Ayres fails to win; if Ayres wins, and White finishes third or worse, Ayres will win on a tiebreaker.
The final group of the day was a family affair, with Joe Aquilante winning in Touring 1 and overall and niece Amy Aquilante scoring victory in American Sedan. The senior Aquilante nabbed his win in the No. 32 Phoenix Performance/Hawk Performance/Hoosier Chevrolet Corvette, while the younger generation bragging rights came in the No. 50 Tom Aquilante Racing Pontiac Firebird.
David Brand kept his Super Touring Under championship hopes alive with a win in the No. 3 Krugspeed Racing/BGB Esqs Lotus Exige. Brand entered the weekend needing two wins to clinch the Eastern Conference title.
The finale of the Eastern Conference Majors Tour takes place on Sunday at the BFGoodrich Tires Watkins Glen Super Tour, with short 8:30 a.m. warm-up sessions followed by the seven 14-lap group races.
More information is available at http://www.scca.com. Like SCCA on Facebook at Facebook.com/SCCAOfficial, or follow on Twitter @SCCAOfficial.
Live timing and notes are available on Sunday at http://www.scca.com/SCCALive.

Inside the SCCA, with Kelton Jago