Gradient made a foray into the WeatherTech Championship last year, contesting the Michelin Endurance Cup rounds, including a win at Petit Le Mans. 2023 will mark the first full season of IMSA competition for the Austin-based team run by Andris Laivins. Monk and Legge will be joined at Daytona by HPD factory driver Mario Farnbacher and Gradient Racing regular Marc Miller.

The signing of Monk and Legge came together quickly, surprising Monk whose program for the coming season was up in the air.

“My plans for 2023 were rather uncertain, which makes this feel like even more of a whirlwind,” said the Newtown, Penn., driver. “I randomly reached out to Katherine to discuss something unrelated – ideas started floating around and things began falling into place. JG Wentworth’s continued support, combined with Gradient’s commitment to furthering my development, has allowed me to reach my goal of IMSA WeatherTech competition, where I will proudly drive the HPD Acura NSX GT3 Evo22.”

Monk has been competing in the Grand Sport class of the Michelin Pilot Challenge for the past three years in a variety of GT4 machinery, and has a win and several podium finishes. Last year she partnered with Kyle Marcelli in a Mustang. Before MPC, she competed in Lamborghini Super Trofeo. 2023 will be her first season of racing GT3 cars.

“Since I have limited experience in GT3 machinery, the goal is to build my comfort level both with the car and multi-class traffic during the ROAR,” she said.

“The pace will follow and I believe working with Katherine, Marc, Mario, and the folks at Gradient will ease the early butterflies. Heading into the Rolex 24, I understand what my responsibilities are and I am prepared to do whatever the team needs of me. I’m excited to begin this next chapter and grateful that Katherine and I will be contesting the full season.”

Legge is no stranger to the NSX and HPD, having competed in the car run by Meyer Shank Racing in 2017-’19 with four victories.

“I’m so excited to be back in the Acura family, my transition to GT racing came in the Acura NSX GT3 and I have some of my fondest memories from those years. I was involved in the platform’s development and I’m proud of what we achieved with HPD, especially giving the car its first global win at Detroit in 2017,” said Legge.

“I’m really looking forward to jumping back in the car at Daytona in the most competitive field ever. Sheena is one of the most promising young talents coming into IMSA and with Mario Farnbacher and Marc Miller we have a lot of experience and fight to win. I couldn’t be more enthusiastic to get this season started.”

“This team is coming into 2023 with a great mix of new talent and old friends; we are ready to pick up where we left off in Atlanta,” he said.

“Sheena has been steadily making a name for herself in IMSA, and we are very proud to join her as she steps up to GTD with JG Wentworth. I hope we can reward their commitment to Sheena on the biggest stage in sports car racing. Katherine and Mario have years of experience in the NSX at the factory level, and Marc has been developing this car at Gradient since day one, so our lineup at Daytona is really something special. The team’s energy is high, we have an incredible pit crew, and the momentum that comes from our big win at Petit Le Mans last October. I can’t wait to get this season started.” 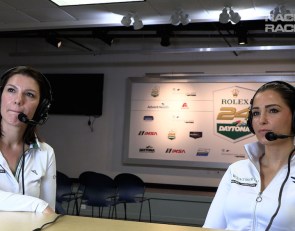