David Gilliland and Toyota made their 2023 partnership official Thursday with a rebranding and driver unveiling for the Craftsman Truck Series.

David Gilliland Racing will become Tricon Garage and move from fielding Ford to Toyota entries. It is a reuniting for Gilliland and Toyota, who previously worked together in 2018 and ’19.

There will be four trucks coming out of the Gilliland stable, three of which will be full-time. Tanner and Taylor Gray and Corey Heim will be the full-time drivers. The fourth truck will be a mix of Toyota talent.

“Toyota is pleased to rejoin Tricon with this expanded partnership,” said Toyota Racing Development president David Wilson. “We are excited for this new opportunity for our Toyota development drivers and partners to experience Tricon’s success and winning culture. The Truck Series is very important to Toyota, and we know Tricon is going to continue to deliver for us as we begin our 20th season in the series.”

The rebranding to Tricon is based on the combination of “tri” and “icon,” “encompassing the partners in the organization and their plans to compete and win three titles — the driver, owner and manufacturer championships.”

“We are thrilled to return to Toyota and compete in the new Toyota Tundra TRD Pro next season,” said David Gilliland. “I’ve seen Toyota’s dedication to the sport firsthand, and we are excited to partner with them going forward. I’m sure this new partnership is going to help Tricon reach our goals of consistently competing for race wins and championships.”

Heim will be full-time in the series next year for the first time in his career. He will drive the No. 11 Toyota Tundra.

“Our goal in the truck series is to create future racing icons,” said Johnny Gray, a partner of Gilliland’s. “We’ll know we did our job when several years from now our drivers are racing for Cup championships. As for Garage, what we do is more than just field a race team. We build chassis, we build bodies. We have a transportation company. We are marketers and content creators. We are teachers and mentors.

“It’s bigger than simply ‘motorsports’ or ‘racing.’ But what it all has in common is that it takes place in our garage. So, Tricon Garage just seemed to encompass what we’re all about.”

SiriusXM, JBL, Safelite AutoGlass, and Mobil 1 — TRD official partners — will join Tricon as team sponsors alongside Tricon’s existing partners. Sponsor lineups on the four trucks is still to be determined, as is team personnel and crew chiefs. 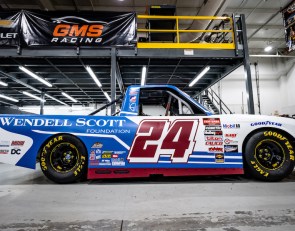