Utah doubles the excitement and the elevation
The Trans Am Series presented by Pirelli Western Championship returns to action with a doubleheader in the penultimate event weekend of the 2022 season at Utah Motorsports Campus, which sits at an elevation of 4,409 feet. The Western Championship shifts focus from the shortest track on its schedule (Portland International Raceway, 1.967 miles) to the longest, as competitors prepare to take on UMC’s 3.048-mile, 15-turn Outer Course. This weekend will mark only the second visit to the Tooele, Utah facility for the Western Championship, which held its first event at the track last year.

With two races just a day apart, staying out of trouble in Race 1 will be imperative, and can be the difference between winning or losing the championship if a contender is unable to start Race 2. Not only will teams have to worry about avoiding crashes, but at UMC’s high elevation, cars will see less cooling effect to the powertrain, which can lead to critical mechanical issues.

New winner guaranteed
When the checkered flag waves for the first event of this weekend’s doubleheader, we are guaranteed to see a new winner at the track, as none of last year’s winners (Carl Rydquist in TA2, Erich Joiner in XGT and Cindi Lux in SGT) appear on the entry list. The top-finishing driver from last year’s event who will be present this weekend is Ken Sutherland in the No. 68 Cascade Sotheby’s/Wyatt Fire Protection Camaro, who finished third overall and second in the TA2 class. John Schweitzer in the No. 00 Superior Builders Inc. Ford Mustang is the top-finishing SGT competitor from last year’s event, finishing second in class and 14th overall. There are no XGT entries returning from 2021.

Utah “home track”
While there aren’t any drivers in the field this weekend who are native to Utah, Mitch Marvosh in the No. 29 Wolf Entertainment Ford Mustang considers Utah Motorsports Campus to be his home track due to his family’s origins in the state. This will be Marvosh’s second start at UMC, and he hopes to top his finish of 10th in the TA2 class, which he achieved in last year’s event. Marvosh currently sits fourth in the TA2 standings.

Last time on track: Portland
The Western Championship had an exciting outing at Portland International Raceway, with three classes represented in the top-three finishing positions when the checkered flag waved. Chris Evans in the SGT class dominated much of the event to take the overall win, followed by Motul Pole Award winner Erich Joiner’s XGT car in second and Ken Sutherland third, taking the win in the TA2 class.

Utah doubleheader may decide championship
With only three races remaining in the Trans Am Western Championship season, including this weekend’s doubleheader, every point will count in determining the 2022 title winners.

In TA2, Jeff Holden in the No. 11 RELAXandCBD.com/Dakota Lithium/Mid Valley Transmission Camaro holds a narrow eight-point lead over Ken Sutherland in the No. 68 Cascade Sotheby’s/Wyatt Fire Protection Camaro. Dave Kunicki in the No. 67 Blue Max Camaro sits 27 points behind Sutherland.

In XGT, Erich Joiner in the No. 10 goodboybob Coffee Roasters Porsche GT3R leads Mike Sheehan in the No. 72 Ferraris Online LLC Lamborghini Gallardo GT3 by just four points, with Bob Mueller in the No. 28 Octavio Tequila Porsche GT3R scored third, 13 points behind Sheehan. 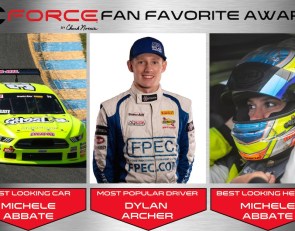