While the Pro and Am titles in GTWCA are already decided, the Pro-Am championship is wide open. The points lead has changed several times between the various teams of Charlie Luck/Jan Heylen, George Kurtz/Colin Braun and Ashton Harrison/Mario Farnbacher. Luck and Heylen came out strong, Kurtz and Braun showed good form mid-season, and Harrison and Farnbacher briefly took the lead after the first race at Sebring two weeks ago, but a mechanical issue in the second more than erased those gains. With 50 points up for grabs in Saturday’s race, and a 15-point spread from Luck/Heylen (191) to Harrison/Farnbacher (176) and Kurtz/Braun in between (177), it’s anybody’s game.

Crowdstrike Racing with Riley Motorsports Mercedes-AMG looks to close the deal on a title for George Kurtz and Colin Braun with help from third driver Ben Keating.

There’s no doubt that Jan Heylen and Wright Motorsports — adding German driver Elia Erhart as its third driver for the 8 Hour — understand endurance racing. Included on Heylen’s resume is a GTD-class win in this year’s Rolex 24 At Daytona. For that matter, so do Braun and Kurtz, both veterans of 24-hour endurance races. They add into the No. 04 Crowdstrike Racing with Riley Motorsports Mercedes-AMG for the 8 Hour possibly the fastest Bronze-rated driver in the country, if not the world, in Ben Keating. That trio won Pro-Am in the 8 Hour two years ago

“This year is a change from prior years and candidly, we’re excited for the change,” noted Kurtz. “We think it’s a good format, and we’ve got a lot of endurance racing experience so hopefully we can put that to the test. And obviously, the Riley guys have a lot of experience in that area. There’s a lot of different cars, so we feel good, and we’re in the hunt for the championship. We’ll see where it ends after eight hours.”

Other than adding Keating, they don’t really see any change to their approach.

“I think it’s business as usual for us,” declared Braun. “We had a tough weekend in Road America; beyond that we had built ourselves a really nice gap in the championship. So I think we’d be silly to change our approach now, considering where it kind of put us. So I think for us, we do what we’ve been doing all year and make good decisions, be smart and what happens, happens.”

There’s plenty of endurance experience in the No. 93 Racers Edge Motorsports Acura NSX as well, with Christina Nielsen joining Farnbacher and Harrison. Nielsen is a two-time IMSA GTD champion, and Farnbacher is fresh off victory at Petit Le Mans. And in 2021, Farnbacher, Harrison and Matt McMurry won the Silver Cup in an Acura NSX in the 8 Hour.

“At this point in the championship we have absolutely nothing to lose but everything to gain, so I really believe going into the Indy 8 Hour this puts Mario and I in a position to just push harder than we have all season,” said Harrison. “I would argue that we push the hardest out of all Pro-Am teams. We really have a lot of drive together, we really want this for Honda we really want this for Racers Edge and Harrison contracting. So I’m really looking forward to the racing part of it because our mentality is to win. There is no other option.”

Beyond the Pro-Am battle, there is a little bit of inter-squad rivalry at K-PAX. Andrea Caldarelli has already captured the Pro driver title, but two of his teammates, Jordan Pepper, who drove the first weekend with Caldarelli but has been paired with Misha Goikhberg since, and Michele Beretta, who has been co-driving with Caldarelli since he and Pepper were split up, are close in the fight for second.

Mercedes-AMG dominating Intercontinental GT Challenge in 2022
There are several teams coming in for the 8 Hour with drivers in the hunt for the championship and to bolster their respective manufacturers’ chances for a win and championship in the Intercontinental GT Challenge. Mercedes-AMG has a hefty lead in the points after the first two rounds, the Liqui-Moly Bathurst 12 Hours and the Total Energies 24 Hours of Spa. The first 10 drivers in the championship are Mercedes-AMG drivers, led by Jules Gounon, followed by Daniel Juncadella and Luca Stolz. Gounon joins Russell Ward and Phillip Ellis in the No. 33 Winward Racing Mercedes-AMG.

Others leading the Pro class fight for Mercedes-AMG in the 8 Hour are US Racetronics, with Tristan Vautier joining Steven Aghakhani and Loris Spinelli; Patrick Assenheimer, Bryan Sellers and Dirk Muller in the No. 63 DXDT Racing entry (David Askew and Scott Smithson are teaming up in the No. 08 with Valentin Pierburg to contest the Am class); and Mercedes-AMG Team Craft-Bamboo Racing with Daniel Morad, Raffaele Marciello and Juncadella. US Racetronics, Winward and Craft-Bamboo Racing are the three Pro entries nominated by Mercedes-AMG to score points, along with Pro-Am entry Sun Energy 1 Racing.

Audi Sport is second in the manufacturer standings, but unlike previous years when they have heavily supported the U.S. race, notably 2022 when they won it, there are no Audi entries, leaving it to Ferrari to try to make up ground on Mercedes-AMG. Ferrari will have four Pro entries, two from AF Corse-Francorchamps for Pierre Ragues, Davide Rigon and former GT World Challenge America champ Miguel Molina (No. 51) and Ulysse De Pauw, Antonio Fuoco and Daniel Serra (No. 71). For several of these drivers, including Serra, it will be their first time racing at Indianapolis Motor Speedway.

AF Corse Ferrari figures to be among the leading International GT entries.

“I’ve never been to Indianapolis so it will be nice to to know the track and race there for the first time,” said Serra, who like many of the other drivers in the race is fresh off of Petit Le Mans last weekend. “I saw the entry list, it is quite a strong entry list. So I’m excited to be there and to spend these 15 days in America racing is nice.”

Conquest Racing, which entered GT World Challenge America with a strong effort at Sebring after having competed in Pirelli GT4 America, returns with a Pro effort for Ferrari with Cedric Sbirrazzuoli, Daniel Mancinelli and Alessandro Balzan. Then there’s an entry from Andretti Autosport x Vital Speed for Jarett Andretti, Jeff Westphal and Ryan Briscoe. The two AF Corse cars are nominated for Ferrari, along with Conquest and the Triarsi Competizione No. 13 with Ryan Dalziel, Justin Wetherill and Conrad Grunewald.

Other nominated entries include the two K-PAX cars with Marco Mapelli (No. 1) and Franck Perera (No. 3) as third drivers, TR3 Racing (Pro-Am with Jeff Burton, Jon Branam and Corey Lewis) and Zelus Motorsports (Am with Jason Harward, Seth Lucas and a third driver TBD)) for Lamborghini; and two Pro-Am entries for Porsche, Wright Motorsports and a GMG Racing entry for Kyle Washington, James Sofronas and Klaus Bachler.

Intercontinental GT Challenge regular Sun Energy 1 Racing, winner of Pro-Am in 2021, returns with Kenny Habul, Martin Konrad and Dominik Baumann in a Mercedes-AMG, and Stephen Cameron Racing also has a Pro-Am entry in a Mercedes-AMG for Chris Cagnazzi, Shane Lewis and Guy Cosmo.

There are a few changes on tap for this year’s Indianapolis 8 Hour. One is that the race moves to Saturday instead of Sunday. This year’s edition also starts later, beginning at noon and running past sunset. Another change is that while in past years the race has included GT4 cars, an aspect unique to the American race, this year’s will be GT3 only.

The race will be livestreamed in the usual places SRO Motorsports America airs its events, including gt-world-challenge-america.com, the GT World YouTube channel and Twitch (SROMotorsports). 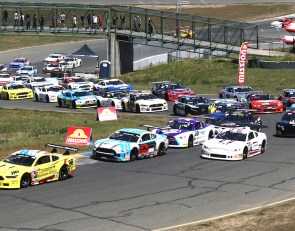