On the strength of the fastest Funny Car run since 2019, points leader Robert Hight held on to the No. 1 qualifying position in front of a sellout crowd on Saturday at World Wide Technology Raceway during the 11th annual NHRA Midwest Nationals.

“As we’ve demonstrated time and again, they love NHRA drag racing as well as the other major events we host at World Wide Technology Raceway. This weekend is magical because it has 10 years of date equity, perfect weather, and thousands of loyal enthusiasts. World Wide Technology Raceway is the greatest comeback story in the history of sports venues for one reason: We have the best racing fans on the planet.”

Hight’s pass of 3.853s at 336.32mph from Friday in his Chevrolet Camaro SS held up during the final two sessions on Saturday, giving the three-time world champ his fifth No. 1 spot this season and 76th in his career. It was also the fastest run in the class in three years as Hight aims for his eighth victory of the season on Sunday.

“That run last night — I’m glad it stuck and I’m really proud of the guys,” Hight said. “I love being here in St. Louis and there’s nothing like seeing the stands full. There’s not any better fans [than the ones] here and we’re going to put on a great show for them tomorrow. That shows you NHRA drag racing is exciting and hopefully we’ll have a great crowd tomorrow. It’s been crunch time all year long and we’ve had big battles every weekend. You’ve got to be on our game on the starting line and your car has to be right.”

Four-time Top Fuel defending world champ Torrence clinched his third No. 1 this season in his dragster, thanks to Friday’s run of 3.655s at 327.43mph in his Capco Contractors dragster. That was a season-best run for the defending event winner, who put together a pair of good runs on Saturday as well. That gave him plenty of bonus qualifying points heading into eliminations, where he’ll open the day against Buddy Hull and will look to make up some major ground in the loaded category.

“I’m looking forward to going into race day tomorrow. We’ve got good momentum. The car is running well, and we will be excited to see what we can do,” Torrence said. “It’s an opportunity for us to capitalize. We need to be there to try to capitalize on things the best we can. We’ve been working pretty diligently to try to get this thing turned around and in the direction that we want it to go, and that is what we have been focused on.”

Koretsky got pushed on Saturday in Pro Stock, but he was up for the challenge, improving to a 6.510s at 211.00mph in his Lucas Oil Camaro to earn his second No. 1 qualifier during the 2022 campaign. His KB Racing teammate Greg Anderson, the defending world champion, ran an identical 6.510s, but Koretsky was slightly faster to take the top spot into eliminations. Koretsky, who is currently fifth in points, will try to pick up his first win of the season and gain some ground on points leader Erica Enders.

“We’re in the Countdown and now’s the time to get your ducks in a row and make every run as clean as possible. I think that’s what we’ve done this weekend and we’ll be good for eliminations tomorrow,” Koretsky said. “This is where it counts and every point counts, and consistency also counts. Our guys are digging deep and we’re chasing them hard. We’re definitely not going to give up.”

In Pro Stock Motorcycle, Smith’s track-record run of 6.709s at 202.82mph from Friday on his Denso Auto Parts Buell held up, giving the defending world champ his fourth top spot this year and the 51st in his career. It was also a career-best run for the five-time world champ, who takes plenty of momentum into eliminations. Smith will look to jump back in the points lead on Sunday after falling in the second round last weekend in Charlotte. Should that happen, it would mean the points lead would change for the sixth straight race in the class.

“I think we have the best bike out here,” Smith said. “All in all, this Denso bike is fast and mean, and if I can do my job on Sunday, we can turn on four win lights tomorrow. That’s our goal, but tomorrow is a big day and hopefully we can do our job.”

Eliminations for the NHRA Midwest Nationals begin at 10:30 a.m. on Sunday at World Wide Technology Raceway. 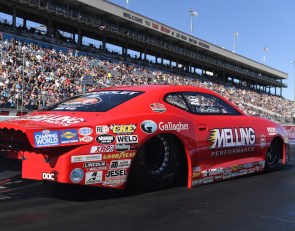