William Byron doesn’t deny that he wanted to send a message to Denny Hamlin at Texas Motor Speedway on Sunday, but said he didn’t mean to spin the Joe Gibbs Racing driver under caution.

The start of the incident traces back to Turn 2 with 73 laps to go. Byron and Hamlin were side-by-side when Byron hit the outside wall. There was no contact between the pair, but Byron didn’t appreciate how close they were.

“He ran me out of room and bent the toe link and we’re lucky we finished,” Byron said. “It was really hard contact; it wasn’t like a light contact or anything like that. I obviously didn’t mean to spin him out over there, but I’m obviously pissed off and just not going to get run like that.

“We’ve always raced so well together, so I don’t know what it was all about. The 19 took his air away, and he ran out of racetrack, so he chose to run me out of racetrack completely. And again, it was not like it was light contact. I thought we were going to be done.”

The spin occurred when the caution came out a few minutes later. Hamlin was running second and Byron third when the two came off Turn 4, and Byron ran straight into the back of Hamlin, sending him through the grass.

Byron’s in-car camera shows the caution was out when the contact was made. NASCAR sent Hamlin to mid-pack for not maintaining his speed, while Byron was not penalized. Hamlin and crew chief Chris Gabehart were incensed over both the incident and lack of action from NASCAR.

“I guess we can just wreck each other under caution,” Hamlin said. “I tried to wreck him back.”

Hamlin ran into the back of Byron and knocked into his right rear after getting his car out of the grass. Byron finished seventh, and Hamlin finished 10th after feeling like he was in the right position to win the race before it was taken away.

Hamlin didn’t seem interested in hearing that Byron said they’ll probably talk things over. Both acknowledged they’ve never had a prior issue, but Byron was adamant what happened was uncalled for, while Hamlin now has the Hendrick Motorsports driver on his list of those who are owed one.

“It all just works itself out,” Hamlin said. “We’ll be racing each other at some point [and] he’ll lose a lot of spots because he’s racing me. This is hard racing, obviously. I’m fine with hard racing. But wrecking me under caution is obviously not what we were bargaining for.

“Thanks to my FedEx Toyota team for bouncing back. Obviously, it cost us all of our track position. I thought we were in a great position to win until we got sent back to 20-something there.” 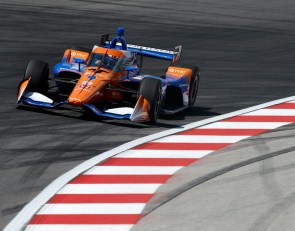