When Laura Hayes was invited to the Mazda MX-5 Cup Scholarship Shootout in the fall of 2021, she didn’t think twice about it. The invitation, as far as she was concerned, came out of the blue. Little did she know that Mazda driver and adviser Tom Long had put her forward as a candidate.

“I was working on my racing program in other series and building the business of Thunder Bunny Racing,” recalls Hayes, who is one of the company’s co-founders. “When the invitation came, I went into it with an open mind and focused on the women’s scholarship.”

Hayes won the Women’s Initiative Scholarship, worth $75,000 toward the 2022 Idemitsu Mazda MX-5 Cup Presented by BFGoodrich.

“I’ve done a number of shootouts, and this one was one of the best run so far,” she says. “The scholarship is great, but it only gets you halfway toward a full season. So part of the competition was demonstrating that I had the capacity to pull off the other half of the funding, and having built up Thunder Bunny Racing over the past few years was the key.”

In 2018, along with several friends, she founded Thunder Bunny Racing as a means to further her own driving career, but also to build a race-prep and driver coaching business.

At 33 years old, Hayes has an impressively wide resume. She grew up outside of Sacramento, Calif., where her father got her started racing in quarter-midgets and karts. She showed promise early on, but when things started to get serious, her parents let her know she would have to find her own way to make it happen. That led her to competing in USAC Sprints and the NASCAR Whelen All-American Series, which led to the NASCAR Drive for Diversity program with James Racing.

Stints instructing at the Richard Petty Driving Experience and BMW Performance Driving School (where she still works when there’s time) followed, before finding her way into Formula Vee and eventually the World Racing League. She also competed in the Pikes Peak International Hill Climb in 2021 and returned in ’22, pulling double duty by racing in the MX-5 Cup event at Watkins Glen the same week.

“MX-5 Cup has been a challenge so far, but we knew going into it that it would be,” says Hayes, who’s just enjoyed her strongest weekend of the season with a pair of 11th-place finishes at July’s Road America doubleheader. “Of course, I want the results to be better, but we’re still learning the car and the series, Being a single-car team, it’s tough because we don’t have anyone to bounce ideas off of, although we have had a lot of advice and help from Tom Long.

“We’re getting better, and I’m getting better as a driver. We’re determined to figure this out. We’re proving ourselves and people are starting to take notice. There’s already been a few people come to us inquiring about next year.”

For Hayes, it’s proving to be a classic case of walking through the doors that are open, rather than banging on those that are closed. MX-5 Cup wasn’t part of her original vision, but the pivot is already paying off, and she fully intends to make the most of it.

The mission to get more women involved in motorsports is an ongoing one, but much of the attention is focused on the sport’s higher rungs. Mazda’s Women’s Scholarship Initiative is opening the door at the entry level.

“There are more and more women coming up through the ranks of racing, but it’s still not many when you look at it as a ratio,” says Laura Hayes, who earned the $75,000 scholarship at last October’s MX-5 Shootout. “I had never been a part of the Mazda family, but I got recommended by Shea Holbrooke and Tom Long. The experience itself of the Shootout was really great and very fair.”

In 2021, three female drivers, including Hayes, were nominated. Hayes’ wholehearted embrace of the opportunity, not only to further her driving career, but also her ambition to grow her own business in the sport, resonates on multiple levels with Mazda’s brand ethos of helping its customers live their own best life.

The 2022 Scholarship Shootout is expected to take place after the SCCA National Championship Runoffs that conclude Oct. 2. Look for a full announcement later in the summer. Meanwhile, Mazda racers and karters who want to be considered, now’s the time to start showing what you’re made of. 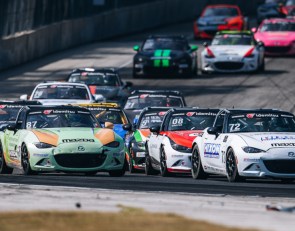