Verstappen cruises to French GP win after Leclerc crashes out

Verstappen cruises to French GP win after Leclerc crashes out

Max Verstappen cruised to an easy win at the French Grand Prix after polesitter Charles Leclerc crashed out of the race in a devastating blow to his title campaign.

Leclerc was in the lead of the grand prix, having fended off 10 laps of Verstappen advances, and was traversing Turn 11 when the rear stepped out in the middle of the corner.

His Ferrari swapped ends before going into the far barrier nose-first, ending his race on the spot.

The Monegasque confessed to making an embarrassing mistake from the cockpit and the crash dropped him to 63 points off Verstappen’s championship lead.

A safety car period ensued, allowing most of the field to make their first pit stops, with the majority switching from medium to hard compound tires.

Verstappen, who had already made his first stop two laps earlier, inherited the lead ahead of Lewis Hamilton, from whom he pulled away easily at the restart.

With the rest of the grid settling into a race-long exercise in tire management, the Dutchman was completely unencumbered on his way to a comfortable 10-second victory.

“I think we had really good pace from the start,” he said. “The car was quick today.

“I just did my race, lived up to the tires.”

“I was putting pressure on Charles. Following around here in this heat … I could never really go for a move. We just tried to stay calm, tried to stay close.

“Of course unlucky for Charles. I hope he’s okay.”

Lewis Hamilton gamely attempted to hang onto Verstappen at the safety car restart, but the Mercedes didn’t have the pace.

With Sergio Perez behind him out of sorts all weekend and unable to mount a fight, the Briton was able to secure second place, Mercedes’s best result of the year.

“What a great result considering we’ve been so far off [Red Bull Racing] this weekend,” he said.

George Russell completed Mercedes’s first double podium of the year after overcoming Sergio Perez is a testy late battle for the place.

Perez was struggling with tire wear when Russell attempted a dive down the inside of the chicane. They made minor contact and held places, though each thought the other deserved a penalty.

The battle continued – after some calming words from the Mercedes pit wall to the new frustrated Russell – until the Briton mugged the Mexican at a late virtual safety car restart to snatch position.

“The pace was strong,” he said. “Glad I could carry on and bring it home P3. Two podiums for Mercedes, it’s great.”

It left Perez a frustrated fourth, though he had another Ferrari strategic blunder to thank for not being demoted to fifth.

Carlos Sainz was brought into Perez’s orbit by the Leclerc safety car, and the Spaniard by then was on the faster medium tire, having started on hards from the last row of the grid, but as the rubber expired, he engaged in a lengthy debate with his pit wall about whether or not to pit.

The team initially rejected the idea with around 13 laps to go because it would be too late to recover the lost time, and Sainz shortly afterwards managed to muscle his way past Perez with some precise side-by-side action through the final sector – only to be called into the pits as he executed the move.

He rejected the call, only to be told to pit again on lap 42 of 53, and this time he accepted, dropping to ninth after serving a five-second penalty for an unsafe release from pit lane at his first stop.

The Spaniard was audibly exasperated over team radio, and despite his best efforts, he could climb only back up to fifth, having initially had his eyes set on Hamilton’s second place.

Alpine beat McLaren on points to move to fifth in the constructors standings, with Fernando Alonso taking sixth ahead of Lando Norris and Esteban Ocon claiming eighth ahead of Daniel Ricciardo in what was a close battle before tire management kicked in towards the end of the grand prix.

Lance Stroll took the final point for 10th in a tight fight with teammate Sebastian Vettel, the German almost rear-ending the Canadian exiting the final corner in an attempted last-ditch pass.

Pierre Gasly finished 12th ahead of Alex Abon, while Valtteri Bottas and Mick Schumacher were the last cars to take the flag in 14th and 15th. 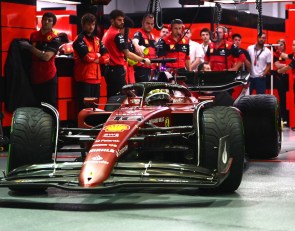