Foyt parks No.11 entry for Toronto due to late sponsorship payments

Foyt parks No.11 entry for Toronto due to late sponsorship payments

The A.J. Foyt Racing team has parked the No. 11 Chevy entry for this weekend’s Honda Indy Toronto event. It’s unclear whether the car driven by Tatiana Calderon on road and street courses and on ovals by JR Hildebrand will return later this season, but the team tells RACER it is only willing to confirm the entry’s absence for Toronto. The team also hopes to bring the car back if and when overdue payments from its primary sponsor are made.

Calderon, the rookie from Colombia who was thrust into the season with almost no preparation, earned her best finishes at the Indianapolis road course race in May with a run to 15th and at Long Beach where she placed 16th. To date, Calderon’s 15th-place finish is better than any of the results produced this year by Foyt’s Dalton Kellett, and better than eight of nine finishes recorded by Foyt rookie Kyle Kirkwood.

In his two oval outings, Hildebrand secured finishes of 14th at Texas and 12th at the Indy 500. The No. 11 Chevy also ranks as AJFR’s only entry that sits within the top 22 in owners’ points, which would qualify the car to earn a lucrative Leaders Circle contract for 2023 that is worth more than $1 million. After the most recent race at Mid-Ohio, the No. 11 is 21st, Kirkwood’s No. 14 is 25th and Kellett’s No. 4 is 27th.

With no immediate timeline for the car’s return, losing the No. 11 brings IndyCar’s number of full-season entries down to 25.

Pedersen to race in Coyote Red with Foyt 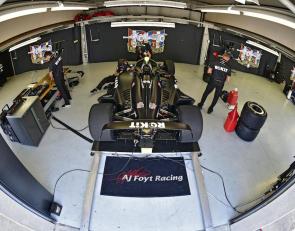