Joey Logano could only laugh in admitting he wished he’d have hit William Byron harder when he had the chance in overtime at Martinsville Speedway.

“Yeah, yeah, I do,” the Team Penske driver said after finishing second. “You’ve got to punt them a little bit harder with this car, it seems like, but it was all I could do to get to him. That was kind of the tough part — his car was superior to mine into the corner for sure.

“That’s where the Hendrick cars have been strong all year; they get into the corner harder than anybody. So, it was all I could do to get to him. Getting to him and bumping him, and me trying to make the turn, it’s just all too much and I couldn’t quite get it done.”

Restarting on the outside of Byron for the final two laps, Logano was able to tuck in behind Byron off Turn 2 on the restart. Logano then felt Byron messed up coming off Turn 4 to the white flag and thought that was the opening he needed.

“(I) thought, OK, here’s my chance,” Logano said. “Went into (Turn) 1 on the white flag lap and got to him and tried to root him up a little bit and I did, but not quite enough. And then he kind of was able to turn back down and really just stop me at the two-thirds. We were going to the gas, he hit the brakes and it just checked me up big, which was the right move.

“He brake-checked the heck out of me and he should have and it worked for him. Then I was just too far back into (Turn) 3. My chance was into (Turn) 1 to try to get him up next to me and didn’t quite get the job done there.”

Logano and the No. 22 team came on strong in the final stage. With track position inside the top five, Logano was able to break up the Hendrick Motorsports of Byron and Chase Elliott party by putting the bumper to Elliott for second place as the race approached the 300-lap mark.

After a round of green-flag pit stops cycled through with 97 laps to go, Logano continued to run second to Byron. Logano fell back to third behind Austin Dillon by choosing the inside lane behind Bryon for a restart with 80 laps to go — a position he would remain in until the final caution for Todd Gilliland hitting the wall in Turn 4.

This time Dillon stuck behind Byron to restart third on the inside lane. Logano said he “had to take” the outside lane in that situation, and when Dillon didn’t get through the gears it helped him get back to second place and a shot at the win. 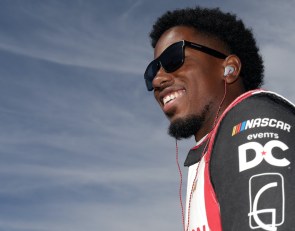