Bowman strives to turn clash with Busch into a positive

Bowman strives to turn clash with Busch into a positive

Alex Bowman turned heat of the moment comments made by Kyle Busch at Las Vegas Motor Speedway into a positive for charity even though he understands where Busch was coming from.

It all began when Bowman won the Pennzoil 400 when put into position because of the two-tire call made by crew chief Greg Ives. But before the caution came out with three laps to go, Busch was sitting pretty by leading the race. The four-tire call for Busch trapped him behind three Hendrick drivers all on two tires for the overtime restart and he finished fourth.

Busch unleashed about the turn of events over his team radio after the checkered flag.

Bowman turned the sentiment into a T-shirt, with 18% of the proceeds going to animal shelter charities. Busch also offered 48% off select merchandise on his website. Both were nods to the other’s car number.

Family sport friendly… 18% of the proceeds backing into an animal shelter near you https://t.co/YTNdSOowYQ

But Busch did reach out to Bowman Monday after Las Vegas to clear the air. Bowman said he received a text from Busch, which he appreciated but didn’t think was necessary.

“I understand why he was mad,” Bowman said Saturday at Phoenix Raceway. “We all know Kyle — he’s super passionate, fiery and gets lit up sometimes. They lost the race, and he was mad about it, so I get that. But I do appreciate him texting me.

“We’ve always raced each other with respect. He’s one of the guys that I feel like I race better with than most So, appreciative of that. We’ve never had any issue before, and I don’t even think that was an issue. It was just an opportunity to make a T-shirt and raise some money for animals.”

Bowman did the same thing after his win at Martinsville Speedway last fall. Called a “hack” by Denny Hamlin, whom he’d spun late in the race, Bowman put it on a shirt that also benefited charity.

In four of Bowman’s last five wins, he led less than 20 laps. And the pass for the win in the last three came with less than eight laps to go. Bowman has seven career wins, and once did he led the most laps en route to winning – Fontana 2020.

“You go home with a trophy either way,” Bowman said of whether it matters to dominate races. “I think we’ve dominated races that we’ve lost and that sucks. Here (at Phoenix) in 2016; a couple of races at Charlotte that we’ve led a ton of laps and not won at the end.

“I think for me, collecting a trophy is really all that matters.” 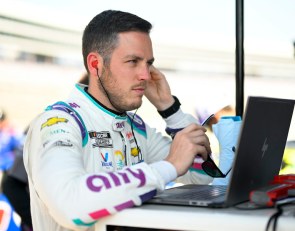