Danny Ongais, the fast and versatile Hawaiian whose long career included time in Indy cars, Formula 1, sports cars and drag racing, died on Saturday of congestive heart failure at the age of 79.

Nicknamed ‘The Flying’ Hawaiian’, Ongais made 11 starts at the Indianapolis 500 between 1977 and 1996, driving the distinctive No.25 Interscope entry to a career-best finish of fourth in 1979, a year after putting the car on the front row alongside Tom Sneva.

Born in Kahului, Ongais got his start racing motorcycles, and returned from a stint as a U.S. Army paratrooper to win the Hawaiian state motorcycle championship in 1960. More success on two wheels followed, but he wasted little time in branching out and added AHRA Gas Dragster titles to his resume in 1963 and 1964, followed by the NHRA AA Dragster championship the following year. A switch to Funny Cars later in the decade yielded two wins in a Ford Mustang for team owner Mickey Thompson in 1969. The Ongais/Thompson combination would prove to be even more potent on the speed record circuit, where they used a Mach 1 Mustang to set nearly 300 national and international records on the Bonneville Salt Flats.

By that point Ongais had already taken a swing at the Indy 500, but was turned away from the 1968 race on the basis of his almost complete lack of experience in open-wheelers. But his time in Europe with the Army had opened his eyes to road racing, and in the mid-1970s he began working up through the ranks of the American scene. His dominance of the 1974 SCCA season put him on the radar of entertainment mogul Ted Field.

After further success in F5000, the pair went into USAC and Indy car racing in 1976 under the Interscope Racing banner. Ongais made his debut at Ontario that year, and claimed his first win the following season at Michigan. He added an additional five victories in 1978 – more than anyone else in the field – but mechanical problems and inconsistency left him eighth in the points. He also made a mark at the Brickyard that year, planting the Interscope car between Sneva and Rick Mears on the front row.

Ongais in the Interscope Racing Parnelli VPJ6C Cosworth at the 1980 Indy 500. He finished seventh after starting from 16th on the grid. Motorsport Images

Ongais and Field also took Interscope into Formula 1 for the two North American races in 1977, yielding a seventh at the Canadian GP. Ongais returned to F1 the following year for two races with Team Tissot Ensign, but with less success.

Towards the end of the decade, Ongais and Field expanded the Interscope horizon to include sports cars – with Field now driving as well ­– and they teamed with Hurley Haywood to win the Rolex 24 at Daytona in 1979 in the Interscope Porsche 935 prototype.

It was also during 1979 that Ongais made his first foray into CART. His debut at Phoenix, where he qualified fourth and led the race before being derailed by an engine failure somewhat set the tone for the next couple of years: a story of blazing speed, but bad luck or other circumstances conspiring against him fully capitalizing on it. But all that took a back seat when he suffered a massive accident in the 1981 Indy 500. He’d pitted as the leader on lap 63, only to lose more than 40s to a catastrophically slow pitstop. Upon rejoining, he made a late pass on a slower car at Turn 3, lost the rear, overcorrected and pounded the barriers nearly head on. He was rushed to hospital in a critical condition, and spent the rest of the season on the sidelines recovering from factures to both legs, a broken arm, and a six-inch tear to his diaphragm.

Indeed, while he continued to produce decent results upon his return in 1983, his later years were defined almost as much by a handful of significant accidents – not all of which he was directly involved with.

He was very much at the center of the big one in 1985, when he was launched into a massive barrel roll down the backstretch at Michigan after running into the rear of Phil Krueger. Two years later, he crashed during practice for the Indianapolis 500 and sustained a concussion that forced him to miss the race. His misfortune set the stage for Al Unser to make some history of his own when Penske called him up as an 11th-hour replacement and he won his fourth Indy 500 in a backup car that had been serving as a show car on display in a hotel lobby in Pennsylvania just weeks earlier.

Ongais’ final appearance at the 500 had its roots in far more tragic circumstances in 1996 when polesitter Scott Brayton was killed in a practice crash and team owner John Menard tapped Ongais as his replacement. Ongais, then 54 and making his first start at the Speedway in a decade, lined up at the rear of the field and finished a remarkable seventh. He made one final attempt to qualify with Team Pelfrey two years later, but was bumped.

Notoriously private and publicity-shy, Ongais spent his later years surrounded by his family in southern California. He was inducted into the Motorsports Hall of Fame of America in 2000. 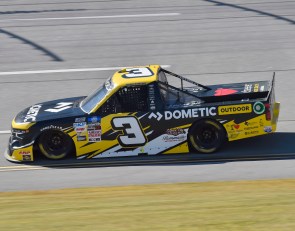